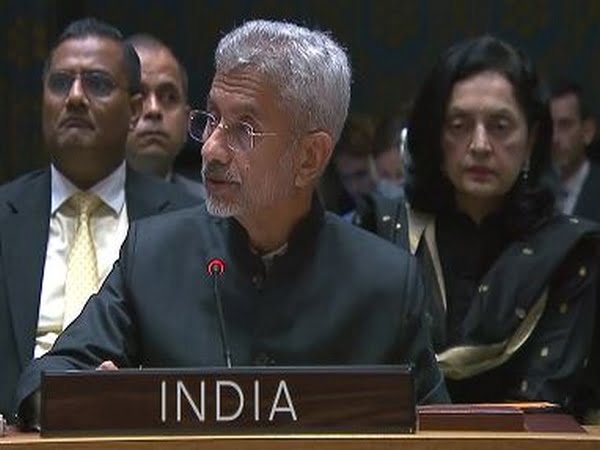 New York [US], September 22 (ANI): Noting that the trajectory of the Ukraine conflict is a matter of profound concern for the entire international community, External Affairs Minister S Jaishankar on Thursday said the world has experienced its consequences in terms of higher costs and shortages of foodgrains, fertilizers and fuel.
Speaking at the UNSC briefing on Ukraine ‘Fight against impunity’, the minister said that the need of the hour is to end the conflict in Ukraine and return to the negotiating table.
“This Council is the most powerful symbol of diplomacy. It must continue to live up to its purpose,” he said.
Jaishankar recalled Prime Minister Narendra Modi’s remarks concerning the Ukraine conflict during his meeting with Russian President Vladimir Putin on the sidelines of the SCO summit.
India, a non-permanent member of the UNSC along with other members attended the Thursday meeting. The council was being represented by foreign ministers at the meeting. This was the first direct encounter between US Secretary of State Antony Blinken, Russian Foreign Minister Sergey Lavrov and Ukraine’s Dmytro Kuleba, who attended the meeting as his country is the subject of discussion.
“The trajectory of the Ukraine conflict is a matter of profound concern for the entire international community. The outlook appears truly disturbing. In a globalized world, its impact is being felt even in distant regions. We have all experienced its consequences in terms of higher costs and actual shortages of food grains, fertilizers and fuel. The global south, especially, is feeling the pain acutely. We must not initiate measures that further complicate the global economy,” Jaishankar said.
“That is why India is strongly reiterating the need for an immediate cessation of all hostilities and a return to dialogue and diplomacy. Clearly, as Prime Minister Narendra Modi has emphasized, this cannot be an era of war,” he added.
Referring to the specific topic before the Council, Jaishankar emphasized that even in conflict situations, there can be no justification for violation of human rights or of international law.
“Where any such acts occur, it is imperative that they are investigated in an objective and independent manner. This was the position that we took with regard to the killings in Bucha. This is the position even today. The Council will also recall that we had then supported calls for an independent investigation into that incident,” he said.
Jaishankar said the fight against impunity is critical to the larger pursuit of securing peace and justice.
“The Security Council must send an unambiguous and unequivocal message on this count. Politics should never ever provide cover to evade accountability. Nor indeed to facilitate impunity. Regrettably, we have seen this of late in this very Chamber, when it comes to sanctioning some of the world’s most dreaded terrorists.
“If egregious attacks committed in broad daylight are left unpunished, this Council must reflect on the signals we are sending on impunity. There must be consistency if we are to ensure credibility,” he said.
On Wednesday on the margins of UNGA, Ukraine’s Prime Minister Denys Shmyhal thanked India and asked India to “join forces” to stop Russia’s invasion when he met Jaishankar.
India has remained neutral on Russia’s invasion abstaining from votes at the Council and the Assembly condemning Moscow. It has provided humanitarian assistance to Ukraine and recently voted with the West on a procedural vote to invite Ukraine President Volodymyr Zelensky to speak remotely to the Council despite Russia’s opposition. (ANI)