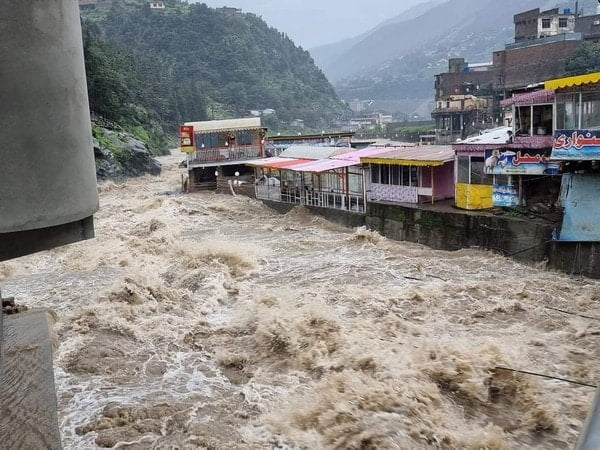 Islamabad [Pakistan], September 22 (ANI): A majority of Pakistanis are unhappy with the government’s response to the unprecedented natural disaster that has ravaged millions of lives in the cash-strapped country, according to a survey.
This displeasure was evident in the latest Pattan survey published this week. The survey was conducted by community-based activists at 38 disaster-hit localities of 14 districts of three flood-hit provinces, the Dawn newspaper reported.
As per the survey, most localities were unhappy with the performance of state institutions. People in 92 per cent of locations were forced to leave their villages and neighbourhoods due to floods, the survey said.
After six weeks of flooding, many families from 15 locations were found living under the open sky on roads, and without tents. In 10 locations majority appeared to have received ‘nothing’, the survey said.
It also said dry ration, drinking water, soaps, sanitary pads, mosquito nets, charpoys and blankets appeared to be the topmost needs.
Since June this year, Pakistan has endured harsh monsoon weather resulting in a serious humanitarian and development crisis.
According to government estimates, about 33 million people across the country have been affected by unrelenting heavy rains and flooding – the worst in decades.

Till date, more than 1,500 people have been killed and thousands of others have been injured.
More than 400,000 houses have also been destroyed and over 700,000 are partially damaged. The waters have claimed hundreds of thousands of livestock, according to United Nations Development Programme (UNDP).
Millions of acres of crops and orchards – many of those ready to harvest – have been damaged and destroyed, and the next planting season is threatened.
Agriculture is a critical source of sustenance and livelihood for the majority of families in Pakistan, and for the economy of the country.
Pakistan has a total of 160 districts. To date, half of these across the country are declared “calamity hit.” And that number is expected to increase.
The Pakistan Meteorological Department (PMD) has predicted more than normal rains in the south-eastern areas of Sindh in September.
As the rains continue the toll on human lives and damage to infrastructure keeps growing. (ANI)

ALSO READ:  UNSC to vote on resolution on Russia's referendums in Ukraine