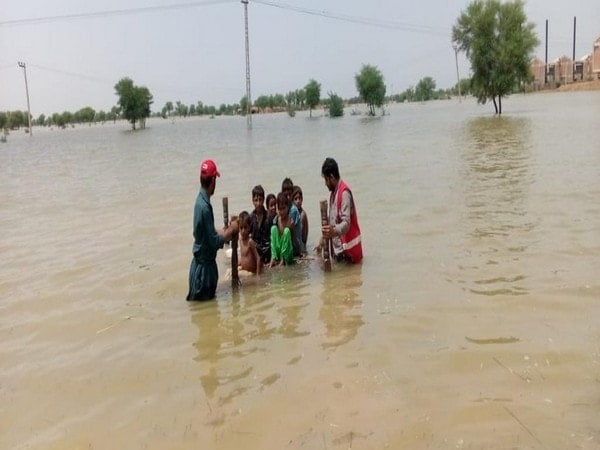 Dhaka [Bangladesh], September 15 (ANI): Pakistan has rejected Bangladesh’s offer to supply humanitarian aid worth 14 million takas after the recent floods and heavy monsoons in the country dampened the hope of a quick revival from the economic crisis.
Bangladeshi Prime Minister Sheikh Hasina announced aid worth Tk 14 million for flood-ravaged Pakistan in her characteristic large-heartedness and altruism, reported Bangladesh Live News.
Pakistan Army is reportedly averse to the proposal of aid from Bangladesh as any such relief assistance may undermine Pakistan’s global image.
Taking any help from a country that was once part of Pakistan could be embarrassing for the Pak Army which still denies the genocide perpetrated by it against Bangladesh in 1971, reported Bangladesh Live News.
The Bangladesh Ministry of Disaster Management and Relief reportedly allocated (September 1) funds for 10 tonnes of biscuits, 10 tonnes of dry cakes, 1,00,000 water purification tablets, 50,000 packets of oral saline, 5,000 mosquito nets, 2,000 blankets, and 2,000 tents to be sent to Pakistan.
Bangladesh PM noted that the Awami League government had always been generous towards humanity and that the concerned authorities had been directed to assist in the relief efforts in Pakistan.

She further underscored that though Bangladesh had won the 1971 Liberation War against Pakistan, it was their duty to help Pakistan as Bangabandhu Sheikh Mujibur Rahman had always emphasized helping those in need.
Ironically, Pakistan had not provided any assistance to erstwhile East Pakistan, now Bangladesh at the time of the 1970 Bhola cyclone in the region, reported Bangladesh Live News.
According to Pakistan’s National Disaster Management Agency, unprecedented heavy monsoon rains and melting glaciers in the northern mountains of Pakistan resulted in huge floods that affected nearly 33 million people and killed an estimated 1,355 people including over 450 children.
Having no option of resurrecting the shattered economy due to sheer mismanagement, climate change, and natural calamity, the Pak government has appealed to the international community to provide aid for the flood victims, reported Bangladesh Live News.
UN Secretary-General Antonio Guterres also visited (Sept 10) Pakistan to express solidarity with the Pak government and people and to exchange views on the national and global response to this catastrophe caused by climate change.
The US has responded by announcing an aid of USD 30 million while help has also been promised by the UK, UAE, Saudi Arabia, China, Qatar, and Turkey.
Nearly 80 districts of Pakistan have been worst hit by the floods. Thousands of people have been lodged in tents or are waiting for shelter under open skies along the main highway that leads to Hyderabad. Either side of the highway could be seen inundated by floodwater for miles. (ANI)