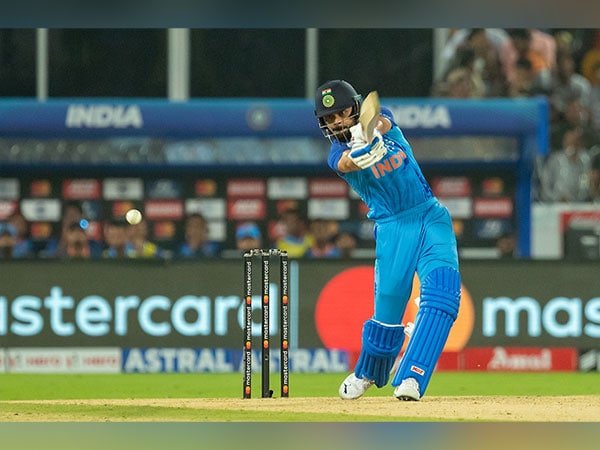 ANI Photo | Game shouldn’t have gone that long, trying to score big in middle overs: Kohli after win over Australia

Hyderabad (Telangana) [India], September 25 (ANI): Following his side’s six-wicket win over Australia in the third T20I, star Indian batter Virat Kohli said that the game should have not gone that long and he is trying to hit more big runs in middle overs to help his team’s cause.
Blistering knocks by Virat Kohli, Suryakumar Yadav and a late cameo of 25* run off 16 balls by Hardik Pandya took India to a six-wicket win against Australia in the third and final game to seal the three-match T20I series 2-1 here at the Rajiv Gandhi International Stadium on Sunday.
“Last game I was a bit disappointed that after hitting him for a four, I went for a double rather than hitting him for a six. I’m making a conscious effort to strike those big ones through the middle overs so that it can help the team situation. The game shouldn’t have gone on that long, we should have probably had 4 or 5 to chase in the final over. It was important to maintain my composure and get one boundary (on that first-ball six in the 20th over),” Virat Kohli said at the post-match presentation.
As India clinched the T20I series against Australia on Sunday, Kohli said he likes to bat at No. 3 in the batting order it provides him with a chance to give experience to the team.
“That’s why I’m batting at 3, giving the experience to the team (at that position). I got off to a good start then I had to take down Zampa because he’s an important bowler through the middle. When Surya started hitting it like that, I kinda looked at the dug-out as well,” he added.
Praising the blistering batter Suryakumar Yadav, Kohli said that the stylish batter has the power to bat under any condition and added that this is the best he has seen him in the “past 6 months or so.”
Suryakumar smashed 69 off 66 balls while Kohli scored 63 off 48 balls to guide Men in Blue to a thrilling run chase victory.

“Rohit and Rahul bhai both told me, ‘you can keep batting on’ because Surya was striking that well. He has the game to bat under any condition (on SKY), he batted beautifully in the Asia Cup. He’s striking the ball well, this is the best I have seen him for the past 6 months or so. He’s got the gift of timing and I was in awe watching him play his shots,” he added.
“Adam Zampa was trying to control my scoring rate, so I was standing outside leg and trying to use that off-side area. I was disappointed at having taken a single after a six, but it was an important strike (on that first-ball six in the 20th over). We were a tad disappointed at not having kept our required rate to around 4-5 runs for the last over, so it was important to get a boundary early on,” said the former skipper.
Kohli said that he is pleased with his knock and wants to do his best while contributing to the team.
“I’m happy with my contribution to the team, I took a break, went back to the nets, worked hard on my fitness and think it’s coming off well. I want to keep contributing and doing my best for the team,” Kohli said.
Talking about the match, Cameron Green smashed 52 off 21 and a late blitz of 54 runs by Tim David guided Australia to post a competitive total of 186/7.
Chasing a target of 187, At one point, India was in trouble at 30 for 2, but the partnership of Kohli and Suryakumar scored 104 runs for the third wicket to keep the team in the game. After Suryakumar was dismissed, Kohli took the initiative.
India needed 32 runs in 18 balls and Pandya and Kohli’s duo smashed Cummins for 11 runs in the 18th over. In the second last over Pandya showed his great skills he slammed a six on the very first delivery of Hazlewood’s spell.
With 11 runs left to win in the last over, Kohli sent the very first delivery of Sams for a six but was sent back to the pavilion after scoring 63 runs in 48 balls. With 5 runs left to win in 4 balls, Dinesh Karthik came out to bat. Sams delivered a wide yorker but Hardik cleverly opened the face of the bat and sliced this fine with one hand to get it to the boundary. With a clever boundary, Hardik guided his team home to clinch the three-match T20I series against Australia. (ANI)