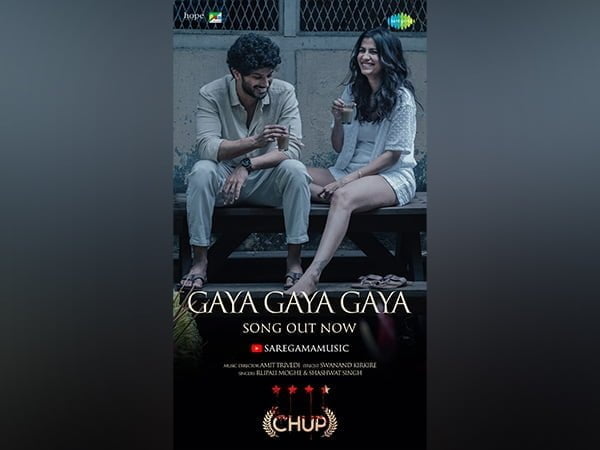 Composed by Amit Trivedi and written by Swanand Kirkire, the song gives us a twist of romance and thrill. While the music and the duo, Dulqer Salmaan and Shreya Dhanvantary could be seen giving a romantic layering to the track, the recurring flashes of the murder mysteries during the video keep the thrilling vibe unspoiled.
Talking about the song, director R Balki said, “Amit Trivedi has done a fabulous job. Music score becomes important for any film and most importantly its connection to the film. ‘Chup’ is an unusual fusion of romance and thrill, and its music had to involve the two. ‘Gaya Gaya Gaya’ aptly includes the enigmatic elements of the film and I am happy with the flow of it. The entire score is mesmerizing and we are looking forward to releasing them all soon.”
Helmed by renowned filmmaker R Balki, the film casts Dulquer Salmaan, Sunny Deol, Pooja Bhatt and Shreya Dhanwanthary in the lead roles and is slated to hit theatres on September 23, 2022.
The film is touted as a romantic psychopath thriller. It is said that the film is a homage to master filmmaker Guru Dutt and his 1959 classic ‘Kaagaz Ke Phool’.
Meanwhile, Bollywood icon Amitabh Bachchan is now gearing up to mark his debut as a music composer for director R Balki’s psychological thriller ‘Chup’.
Director R Balki is known for his spectacular films like ‘Paa’, ‘Ki and Ka’, ‘Padman’, and ‘Shamitabh’, which received positive responses from the critics and the audience.
Meanwhile, Dulquer is currently getting a lot of praise for his recently released film ‘Sita Ramam’ which also starred Rashmika Mandanna and Mrunal Thakur in the lead roles.
Sunny, on the other hand, will also be seen in director Anil Sharma’s ‘Gadar 2’, alongside Ameesha Patel and Utkarsh Sharma, and in ‘Apne 2’ along with his father Dharmendra, his brother Bobby Deol and his son Karan Deol. (ANI)