Good that this audio got leaked, says Imran Khan over ‘foreign conspiracy’ in Pakistan 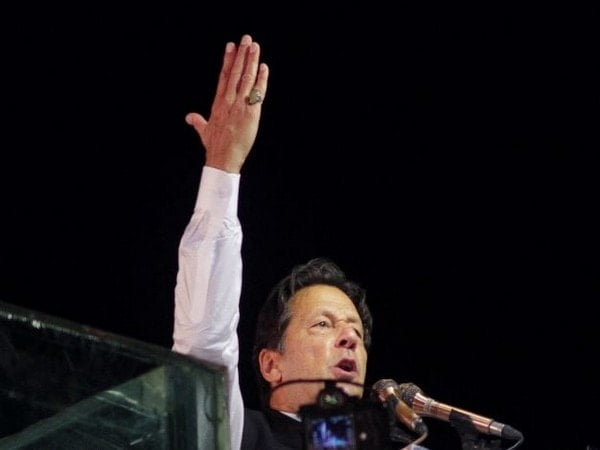 ANI Photo | Good that this audio got leaked, says Imran Khan over ‘foreign conspiracy’ in Pakistan

Islamabad [Pakistan], September 29 (ANI): After the alleged conversation between a former country’s Prime Minister Imran Khan and Principal Secretary Azam Khan about the “US conspiracy” went viral, the PTI chief on Wednesday said that the “cypher should also be leaked so that everyone would come to know how big that conspiracy was.”
In a series of audio leaks in recent days in Pakistan, an audio clip of Imran Khan went viral on Wednesday.
“It is good that the audio got leaked, I would say the cypher should also be leaked so that everyone should come to know how big was that foreign conspiracy,” Imran Khan told reporters today, as per The News International.
Khan alleged that Pakistan Prime Minister Shehbaz Sharif of leaking that audio when asked who did this, as per the publication.
It is pertinent to mention that “US conspiracy” refers to the foreign conspiracy which Imran Khan termed as the conspiracy by the US to topple the PTI government and replace it with Shehbaz Sharif’s government in Pakistan.
According to The News International, in the latest leaked audio, Imran Khan could be heard directing his then principal secretary that they should play with the “cypher issue without taking the name of the United States.”
“Let’s play with it,” Imran Khan believed to be said in the audio, to which Azam Khan suggested that they should hold a meeting on the US cypher to bring it on record.

Earlier, audio clips purported of Pakistan’s Prime Minister Shehbaz Sharif with government officials and Pakistan Muslim League Nawaz (PML-N) Vice-President Maryam Nawaz had also surfaced online.
It is to be noted that after those controversial audio leaks, Imran Khan on Monday said that Chief Election Commissioner (CEC) Sikandar Sultan Raja should resign “if he had any shame,” media reports said.
Pakistan Tehreek-e-Insaaf (PTI) chief Imran Khan claimed that the audio leak is proof that the CEC, Sultan Raja, is in cahoots with the Sharif family and his alleged involvement in corruption, reported Pakistani local media The Express Tribune.
The audio clip featuring Shehbaz Sharif and Maryam Nawaz had surfaced online, where they were asking to stop the health insurance card program, as per local media.
After the audio leaked, Finance Minister Miftah Ismail stepped down in the middle of a trip abroad and made way for PML-N leader Ishaq Dar.
Ishaq Dar was involved in several corruption cases. Earlier, in May, the Pakistan court issued a perpetual arrest warrant against former Finance Minister Ishaq Dar in “corruption reference.”
The National Accountability Bureau (NAB) had filed the reference against Dar, who has been declared an absconder in the case since he has missed hearings owing to his prolonged stay in London, that the former Minister had acquired assets beyond his known sources of income, Dawn newspaper reported. (ANI)