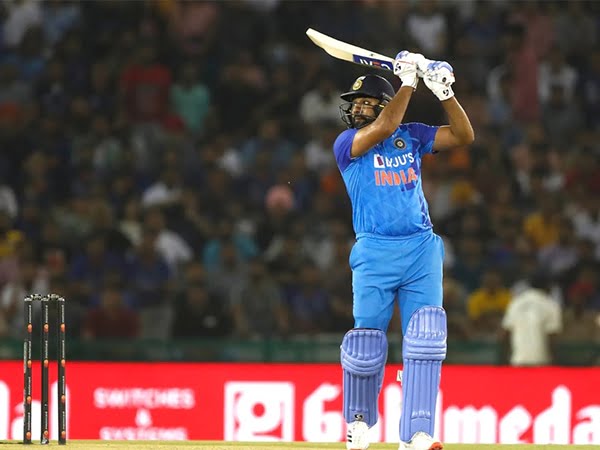 ANI Photo | His ability to play fast bowling is second to none: Dinesh Karthik on Rohit Sharma

Nagpur (Maharashtra) [India], September 24 (ANI): Following their six-wicket win over Australia in a rain-truncated second T20I, Indian wicketkeeper-batter Dinesh Karthik lauded skipper Rohit Sharma’s knock, saying that his ability to play fast bowling is second to none.
Rohit Sharma’s unbeaten 46 of 20 balls helped India chase a massive 91-run target to level the series 1-1 in the second T20I in Nagpur here at the Vidarbha Cricket Association (VCA) Stadium in Nagpur which was impacted by rain.
“Rohit batted brilliantly. To hit those shots to a new ball against world-class bowlers on that surface is not an easy task. It shows how big Rohit Sharma is as a player in not only Indian cricket, but also the World. His ability to play fast bowling is second to none. That is what makes him special as a batter,” said Karthik in a post-match press conference.
On how he has been preparing himself to play as a finisher with less number of balls remaining in an inning, Karthik said, “I have been practicing for this. I was happy doing this for RCB, I am happy to do this here. It is a consistent routine over a period of time. During my off-time, I do a lot of scenario practices. Vikram and Rahul have also been accommodating of what I want to practice and what kind of shots I want to practice. I do not practice too much, but I try keeping it specific.”
Karthik said that it felt really good playing this game for the people of Nagpur, who came in heavy numbers to support the Men in Blue in this crucial match.

Coming to the match, it was reduced to eight overs per side due to rain. India opted to bowl first after winning the toss. Australia posted 90/5 in their eight overs. Knocks from Aaron Finch (31 off 15 balls) and Matthew Wade (43 off 20) helped Australia post a challenging total on the board.
Axar Patel was the pick of the Indian bowlers, taking 2/13 in two overs. Jasprit Bumrah also returned to action with a two-over spell of 1/23. Pacer Harshal Patel leaked runs once again, giving away 32 runs in just two overs.
Chasing 91, Team India was off to a great start, posting 39 in just 2.5 overs before KL Rahul was dismissed for 10 off 5 balls. Spinner Adam Zampa helped Australia make a brief comeback, trapping Virat Kohli (11 off 6 balls) and Suryakumar Yadav (golden duck) quickly, reducing India to 55/3 in 4.3 overs. But it was opener Rohit Sharma (46* off 20 balls), who kept one end steady and his partner Dinesh Karthik (10*) finished off things in style with a six and four in the first two balls of final over. India finished at 92/4 in 7.2 overs.
Adam Zampa delivered a brilliant spell of 3/16 in two overs but could not guide his team to a win. Pat Cummins also took one wicket.
Rohit was adjudged as ‘Man of the Match’ for his brilliant 46* off 20 balls, consisting of four boundaries and four sixes.
India has now levelled the series 1-1, with the decider set to be played in Hyderabad on September 25. (ANI)

Rohit Sharma becomes batter with most sixes in T20I cricket