India at UN General Assembly: The week that was 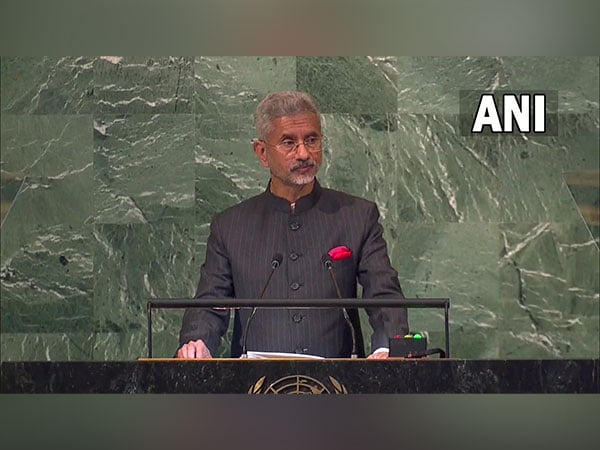 ANI Photo | India at UN General Assembly: The week that was

By Reena Bhardwaj
New York [US], September 25 (ANI): Several statesmen from across the world extended support to India and its diplomacy at the UN General Assembly session which is about to end soon.
From Ukrainian President Volodymyr Zelenskyy to Russian Foreign Minister Sergey Lavrov, from UN Secretary-General Antonio Guterres to French President Emmanuel Macron, some of the most powerful voices underscored and referred to “India” in a positive light this week.
Secretary-General Antonio Guterres, in his message to a special ‘[email protected]’ event on showcasing the ‘India-UN Partnership in Action’, underlined that as home to the largest youth generation in history, India will be decisive in the success of the Sustainable Development Goals (SDGs).
“Looking ahead, India, home to the largest youth generation in history will be decisive in the success of the Sustainable Development Goals, and reiterating Prime Minister Modi – as you reform, the world transforms,” Guterres said.
Almost every leader from the developed or developing world used the Assembly this week to call for the UN to “become more inclusive” in how it handles global security. That included a proposal to expand the UN Security Council, and India reflected in the references to qualify which has the final say under international law for keeping the peace.
External Affairs Minister S Jaishankar said that there has been a “shift” on the issue of UN reforms among the international community that was seen this week.
“In respect of UN reform, every General Assembly (session) you revisit that issue, but this time something has shifted. You can see that, you can sense that,” Jaishankar told reporters on Saturday as he wrapped up the New York leg of his visit to the US with his address to the UNGA high-level session.
Jaishankar said it is not that only he has sensed a shift on the issue of UN reforms. “I think everybody sensed a shift and it’s something which others actually brought up with me”.
Russian Foreign Minister Sergey Lavrov “explicitly’ backed India for a permanent seat, straight 60 minutes after he met up with his Indian counterpart.
Addressing the UNGA session, Russian FM Sergey Lavrov said that the country sees India as a “key international actor” and a “worthy candidate for permanent membership within the Council.”
“We note India and Brazil in particular as key international actors and worthy candidates for permanent membership within the Council whilst at the same time unilaterally and mandatorily raising the profile of Africa,” Lavrov said.
“You can look and see that a consensus that President Biden articulated… I think you also saw Foreign Minister Lavrov of Russia today explicitly mentioned India from the General Assembly body. A number of countries actually also referred to India, it’s not usual in a General Assembly for Presidents or Prime Ministers or Foreign Ministers of countries to refer to another country,” Jaishankar, the former diplomat told reporters.
The Russians were not the only ones to refer to India. Ukraine President Volodymyr Zelenskyy too questioned why countries like India, Japan, Brazil and his own nation are not permanent members of the UN Security Council and said “the day will come when this issue will be resolved.”
“There was a lot of talking about reforming the UN. How did it all end? No result,” Zelenskyy said in his pre-recorded message to the world leaders.
Portuguese Prime Minister Antonio Costa on Thursday called for UNSC reform that should include representation of India, Brazil and the African continent at the UN Security Council.

Addressing the Assembly, PM Costa advocated for a Security Council that incorporates a comprehensive view of security and gives fair representation to small countries.
“We need a representative, agile and functional security council that is able to respond to the challenges of the 21st century without being paralyzed and whose actions are scrutinised by the other members of the United Nations,” he said.
Prime Minister Narendra Modi urging Russian President Vladimir Putin to seek peace in Ukraine, telling the Russian leader that “today’s era is not one for war” was another reason for world headers to laud the efforts of Indian leadership.
French President Emmanuel Macron, while addressing world leaders said that Prime Minister Narendra Modi was right when he told Russian President Putin that this is not the time for war.
Macron in his address said, “Narendra Modi, the prime minister of India, was right when he said the time is not for war. It is not for revenge against the West or for opposing the West against the East. It is the collective time for our sovereign equal states to cope together with challenges we face.”
Mexico even proposed to the United Nations to set up a committee including PM Modi, Pope Francis and UN Secretary-General Antonio Guterres to mediate permanent peace between Russia and Ukraine.
This proposal by Mexican Foreign Minister Marcelo Luis Ebrard Casaubon while participating in a UN Security Council debate on Ukraine in New York late Thursday came days after Modi’s “today’s era is not of war” message to President Putin on September 16.
As India and the UK are looking to firm up a visit to London next month by Prime Minister Narendra Modi, one of the initial messaging coming from the newly appointed Prime Minister Liz Truss was one of deepening ties,
“We must look into deepening our links with fellow democracies like India, Israel, Indonesia and South Africa”, she said.
Turkey this year again raked up Kashmir at the General Assembly, but the tone was a lot different. In his address to the United Nations, Turkey’s President Recep Tayyip Erdogan said it is “unfortunate” that India and Pakistan haven’t been able to establish peace 75 years after independence and hoped for “fair and permanent peace” in Kashmir.
“India and Pakistan, after having established their sovereignty and independence 75 years ago, still haven’t established peace and solidarity between one another. This is unfortunate. We hope and pray that a fair and permanent peace and prosperity will be established in Kashmir,” Erdogan said at the General Debate.
Hours after the Turkish President’s reference to Kashmir, Jaishankar took to Twitter and said it is important to respect UNSC resolutions on Cyprus.
“Important that relevant UN Security Council resolutions in respect of Cyprus are adhered to by all,” Jaishankar tweeted.
On Friday, Pakistan Prime Minister Shehbaz Sharif said that Islamabad wants peace with all its neighbours, including India, but it is possible only after a “just and lasting solution to the Kashmir dispute.”
Sharif claimed that India’s “illegal and unilateral” actions to change the special status of Jammu and Kashmir have inflamed regional tensions.
The Government of India on Saturday slammed Pakistan’s Prime Minister for his anti-India tirade. The first secretary of the Indian Mission to the United Nations, Mijito Vinito, termed Shehbaz Sharif’s claims over the Kashmir issue false and accused Islamabad of indulging in “cross-border terrorism”.
“It is regrettable that the Prime Minister of Pakistan has chosen the platform of this assembly to make false accusations against India. He has done so to obfuscate misdeeds in his own country and to justify actions against India,” Vinito said. (ANI)