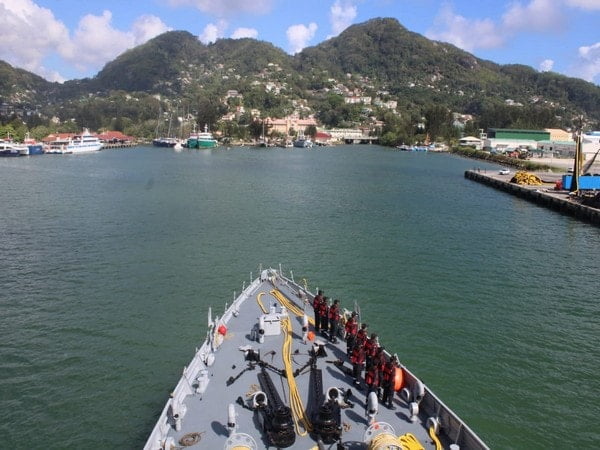 New Delhi [India], September 26 (ANI): The Indian Naval Ship Sunayna entered Port Victoria, Seychelles on Saturday to participate in the annual training exercise Operation Southern Readiness of Combined Maritime Forces (CMF), the Ministry of Defence said in a statement.
According to the Ministry, this reinforces the Indian Navy’s commitment to maritime security in the Indian Ocean Region and marks the maiden participation of an Indian Navy ship in the CMF exercise.
INS Sunayna, the Offshore Patrol Vessel (OPV) of the Indian Navy is scheduled to participate as an associate partner in the capacity-building exercises being conducted by CMF.
The Ministry said that the joint training exercise is being attended by representative delegations from USA, Italy, Australia, Canada, and New Zealand and ship participation from UK, Spain and India.
The statement added that professional interactions with participating nations are planned during her port call.

INS Sunayna, the second of the NOPV (Naval Offshore Patrol Vessel) class of ship was commissioned at Kochi on October 15 in 2013 by Vice Admiral Satish Soni, Flag Officer Commanding in Chief Southern Naval Command.
Based under Southern Naval Command, the ship was designed and constructed indigenously by Goa Shipyard Limited to meet the increasing ocean surveillance and patrolling requirements of the Indian Navy.
According to the Indian Navy, the warship is designed to undertake fleet support operations, coastal and offshore patrolling, ocean surveillance and monitoring of Sea Lines of Communications and offshore assets, and escort duties.
Two KOEL/Pielstick Diesel engines propel INS Sunayna and enable it to achieve speeds in excess of 25 knots. The ship also has an automatic power management system installed by Larsen and Toubro.
She is fitted with the latest Navigation, Communication and Electronic Support Systems. The armament fit includes one 76 mm Gun with an electro-optic fire control system, Close in Weapon Systems (CIWS) and CHAFF launchers. As per the Indian Navy, INS Sunayna can also carry a helicopter. (ANI)

ALSO READ:  UP gets investment proposals worth Rs 1.68 lakh crore for GIS 2023