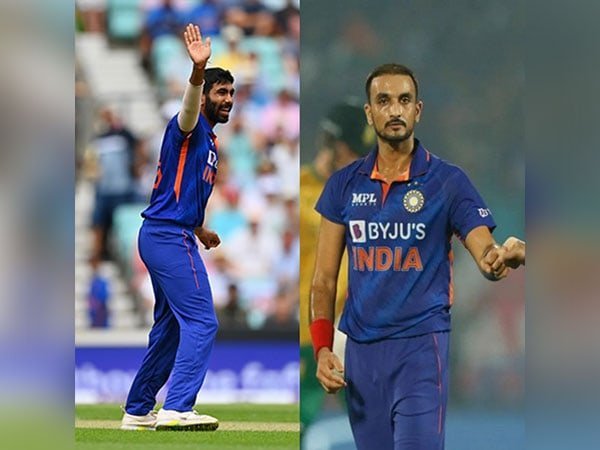 By Vipul Kashyap
New Delhi [India], September 11 (ANI): India pacers Jasprit Bumrah and Harshal Patel are all set to make it to the squad for the ICC T20 World Cup 2022, said sources.
The sources said that both players are in good shape now after recovering from their injuries and are training regularly in National Cricket Academy (NCA).
“Jasprit is bowling in nets regularly at NCA. The medical team is keeping a close eye on him, he is looking fine and he will come back most likely. The final test is not done yet but he will clear it. On the other hand, Harshal is also doing well and hopefully he will be available for selection as well. Rest all depends on final tests,” sources told ANI.

The selection meeting for the ICC T20 World Cup are likely to happen soon.
Both Bumrah and Harshal were not included in the Asia Cup squad earlier in August due to injuries and they both started their rehabilitation at NCA.
Notably, Harshal Patel is India’s second highest wicket-taker in T20I cricket this year with 19 scalps, with veteran Bhuvneshwar Kumar at the top with 31 wickets. Bumrah has only played three T20Is this year, across which he has taken three wickets.
ICC T20 World Cup is set to take place from October 16 to November 13 this year.
Notably, India earned a third place finish in the Super Four Phase of Asia Cup 2022 and failed to qualify for the final. They earned the Super Four qualification after wins against Pakistan and Hong Kong in Group stage but failed to win against Pakistan and Sri Lanka in Super Four phase, though they won their final game against Afghanistan. But it was not enough to earn them a qualification to final. Sri Lanka and Pakistan will be squaring off in the Asia Cup final on Sunday. (ANI)