Katrina Kaif dances with students at her mother’s school in Madurai, watch video 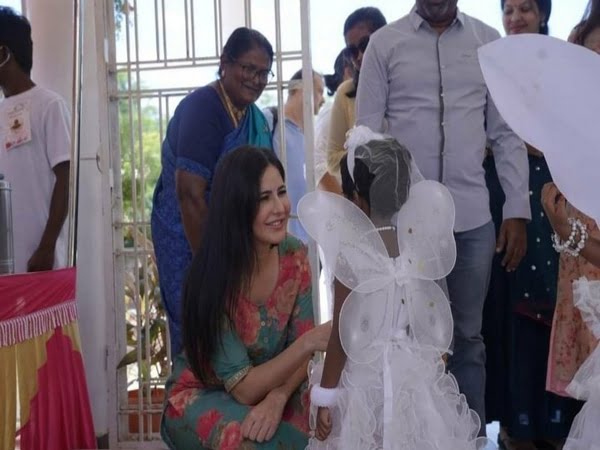 Madurai (Tamil Nadu) [India], September 26 (ANI): Actress Katrina Kaif recently visited her mother Suzanne Turquotte’s school Mountain View School in Madurai, Tamil Nadu.
A video has been doing the rounds on the internet in which she is seen dancing to the viral Arabic Kuthu song from Thalapathy Vijay and Pooja Hegde’s movie Beast with school kids.
https://twitter.com/myqueenkay1/status/1573913302337478657
Katrina looked graceful in a green floral kurta and matching palazzo pants. Her sister Isabelle Kaif and celebrity fitness instructor Yasmin Karachiwala were also spotted at the school along with Katrina.
In another video, she is seen grooving with a bunch of adults who appear to be the school staff on a stage.

https://twitter.com/dp_karthik09/status/1573976121585958913
Katrina’s clip has won many hearts.
Reacting to the viral clip, a social media user commented, “How cute.”
“She looks so beautiful,” another one commented.
Meanwhile, on the work front, Katrina will be next seen in an upcoming horror comedy film ‘Phone Bhoot’ alongside Siddhant Chaturvedi and Ishaan Khatter, which is all set to hit the theatres on November 4, 2022.
Apart from that, she is also a part of ‘Merry Christmas’ along with south actor Vijay Sethupathi, and ‘Tiger 3’ with Salman Khan, which is slated to release on April 23, 2023. (ANI)