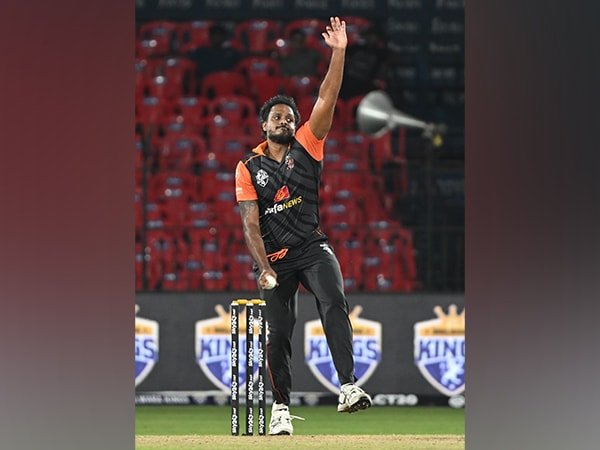 Cuttack (Odisha) [India], September 27 (ANI): The eighth match of the Legends League Cricket (LLC) on Monday saw a nail-biting finish as Harbhajan Singh’s Manipal Tigers edged out Irfan Pathan’s Bhilwara Kings by just 3 runs to register their first win of the League.
After a superlative opening partnership between Tatenda Taibu (54) and Jesse Ryder (47) helped the Tigers post 175/8 in 20 overs, the Kings, powered by brothers Irfan (23) and Yusuf Pathan (42), almost pulled off a thrilling chase at the Barabati Stadium.
The Kings needed 9 runs from the last over to win, but former Sri Lanka speedster Dilhara Fernando conceded only 5, besides also taking two wickets.
Fernando finished with 4/31 from his four overs as the Kings ended on 172/9. Skipper Harbhajan Singh and Parvinder Awana took two wickets each while Muralitharan took one wicket.
The Kings did not get the blistering start that the Tigers had. While Taibu and Ryder had plundered 63 without loss in their Powerplay overs, the Kings managed only 43/1.
The pair of Tanmay Srivastava (26) and Yusuf brought out a few big hits in the middle overs, but the former got out in the 15th over. That saw Irfan join brother Yusuf at the crease.
The Pathan brothers shared a 41-run stand in quick time before Irfan was out on the penultimate ball of the 18th over. But Yusuf carried on. But after he was out off the last ball of the 19th over for a 42 off 21 balls, the Kings’ chase lost steam.

Earlier, the decision to put the Tigers in to bat first backfired on Kings’ captain Irfan as the rival openers swung into action with big hits from the very beginning. A copybook six over Irfan’s head from Taibu showed that his skills with the bat remain as they were during his playing days.
Former Zimbabwe captain Taibu was more fluent, scoring 54 off 30 balls with five fours and four sixes. New Zealander Ryder too was at his aggressive best as he slammed 47 off 35 balls, with six boundaries and two sixes.
The opening pair shared a 109-run partnership before Irfan was bailed out by Yusuf. Bowling his part-time spin, Yusuf (2/25) removed both Ryder and Taibu in the 11th over of the innings.
The dual strike pushed the Tigers on the backfoot somewhat and their run rate dropped. Corey Anderson (24) and Mohammad Kaif (32) tried their best to force the pace of the innings, but did not quite succeed.
The Tigers’ hopes of having a couple of big overs at the death were hit hard when Caribbean speedster Tino Best (3/20) scalped three wickets in the 19th over.
However, in the end, it was proved that the Tigers had indeed scored enough to claim victory.
Dilhara Fernando got the ‘Man of the Match’ award for his match-winning 4/31. (ANI)

US provided USD 56.5 million in aid to Pakistan for flood relief, humanitarian assistance