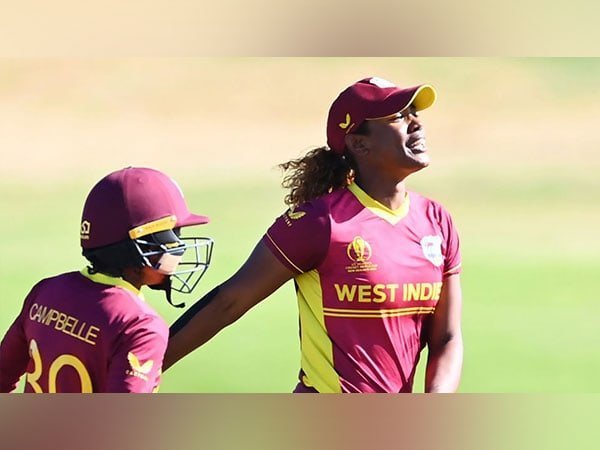 Bridgetown [Barbados], September 13 (ANI): Wicketkeeper-batter Natasha McLean and offspinner Sheneta Grimmond have returned to the Women’s ODI side. The Cricket West Indies (CWI) announced a 17-player squad for their upcoming ODI series against New Zealand.
The first match of the series will be held at Sir Vivian Richards Stadium on September 16, with the remaining games to be held at the same venue on September 18 and 22.
The two teams will then meet in a five-game T20I series that commences on September 25.
The squad also included Under-19 uncapped left-arm quick Jannillea Glasgow.
The three-match ODI series will see star all-rounder Hayley Matthews take the captaincy reins from Stafanie Taylor for the first time, while a host of big names are missing from the squad.

It will be the first series the West Indies have played since the shock retirement of Deandra Dottin, while experienced duo Anisa Mohammed and Kycia Knight are also missing.
Cricket West Indies Lead Selector for women’s cricket, Ann Browne-John is excited to see how Matthews fares as captain ahead of next year’s ICC Women’s T20 World Cup in South Africa.
“The New Zealand series is very important on the women’s cricket landscape not only because it starts a new cycle, but also because it is part of the preparation leading towards the T20 World Cup in South Africa,” Browne-John said in an official statement released by CWI.
“With a few senior players unavailable at this time, for different reasons, like the experienced Anisa Mohammed, Kycia Knight and recently retired Deandra Dottin, the selectors were still able to get a blend of senior and developing players including Under-19 player Jannillea Glasgow and returning players Natasha McLean and Sheneta Grimmond,” Browne-John said.
“Ultimately, we believe that captain Hayley Matthews, in her first series, will have a promising squad of players to start building with,” she added.
West Indies ODI squad: Hayley Matthews (c), Aaliyah Alleyne, Shemaine Campbelle, Shamilia Connell, Afy Fletcher, Cherry Ann Fraser, Shabika Gajnabi, Jannillea Glasgow, Sheneta Grimmond, Chinelle Henry, Kyshona Knight, Natasha McLean, Chedean Nation, Karishma Ramharack, Shakera Selman, Stafanie Taylor and Rashada Williams. (ANI)

What might the PLA be learning from Russian errors in Ukraine?