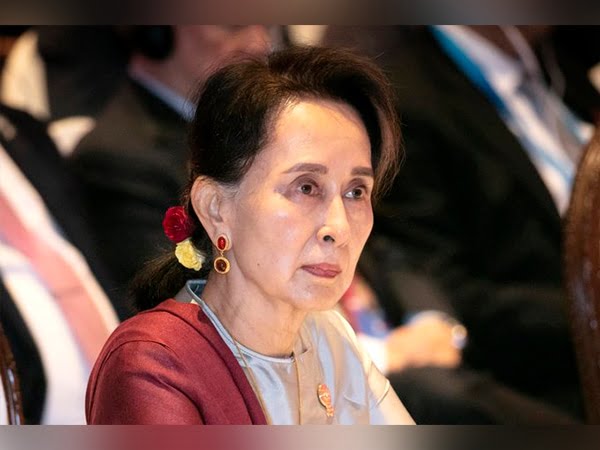 Naypyidaw [Myanmar], September 29 (ANI): A special Myanmar military court on Thursday sentenced the country’s deposed leader Aung San Suu Kyi and members of her economic team to three years in jail.
San Suu Kyi’s team included Australian economist Sean Turnell who was imprisoned for violating the Official Secrets Act, The Irrawaddy news website reported.
The latest verdict delivered at a special court means that San Suu Kyi has been sentenced to over 20 years in prison so far in a dozen cases.
Turnell, a former key economic adviser to Suu Kyi, was detained by the Mynamar military shortly after last year’s coup, which ousted the National League for Democracy (NLD) government.
Since staging a coup in February last year, the Myanmar military has carried out a brutal nationwide crackdown on millions of people protesting its rule.

Rights groups say the junta security forces’ mass killings, arbitrary arrests, torture, sexual violence, and other abuses against protesters, journalists, health workers, and political opposition members amount to crimes against humanity.
Earlier this month, UN experts said human rights defenders documenting and responding to atrocities by Myanmar’s military junta urgently need comprehensive support, including financial, and called on the international community to end apparent indifference to the violence targeting the country’s population.
“In the face of inaction by the international community, and with human rights violations continuing to be perpetrated on a daily basis by the military junta, human rights defenders are persisting in their support for those targeted and working to preserve the possibility of justice in the future,” said Mary Lawlor, UN Special Rapporteur on the situation of human rights defenders.
Along with Tom Andrews, Special Rapporteur on the situation of human rights in Myanmar, Lawlor highlighted the grave risks defenders face and the specific challenges confronting women human rights defenders.
“Defenders have been murdered and disappeared by the military since the coup took place. They now risk arrest, detention, torture, including sexual violence and death when going about their work and fear having their documents seized at military checkpoints,” the experts said. “Many have had to go into hiding after being targeted by the military for assisting survivors of gender-based violence. They are on the move constantly, and women human rights defenders often have no choice but to take their children with them when they flee.”
Others have had to relocate to neighbouring countries, where they remain vulnerable. Lawlor and Andrews said they had publicly expressed concerns for the safety of defenders in the country just over a year ago.
“The international community must not adopt a passive stance when it comes to the crimes that are being perpetrated by the military junta and the risks for human rights defenders in Myanmar,” the experts said. (ANI)