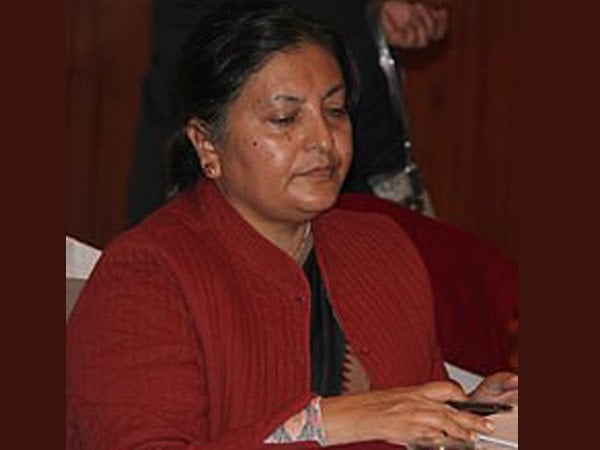 Kathmandu [Nepal], September 21 (ANI): A meeting of the ruling alliance has lashed out at President Bidhya Devi Bhandari for making “unconstitutional moves” while students affiliated with ruling parties continued to burn effigies of her.
Nepal again has headed for constitutional crisis and unrest after Bhandari declined to authenticate the citizenship bill sent to her by the Parliament for certification.
Issuing a strong-worded joint statement after an hours-long meeting on Wednesday morning the ruling parties criticized President Bhandari for “violating” the Constitution.
“The President’s move is a blatant violation of the Constitution and parliamentary dignity. We have taken it very seriously. This unconstitutional move by the President has grossly insulted and devalued the Federal Parliament elected by the people,” the statement reads.
The alliance has concluded that President Bhandari has disrespected the dignity of the Constitution and has snubbed the parliamentary system by violating the constitutional obligation to authenticate the Bill.
The parties said that the President’s move has caused a threat to the system itself, and violated the dignity of the Constitution and the Parliament.
The student union belonging to the Nepali Congress, CPN-Maoist Center, CPN-Unified Socialist and People’s Socialist Party Wednesday burned the effigy of the President after her move to defunct the citizenship bill.
The reaction of political parties comes past the deadline for authenticating the citizenship bill sent by the Parliament to President Bhandari which ended past Tuesday midnight.
The Constitution of Nepal -2072 only gives the timeframe of 15 days to the President to authenticate the bill. The controversial citizenship bill was sent to the president by the then Speaker of the house Agni Prasad Sapkota for the second time on September 5.
Therefore, as mentioned in Article 113, Sub-section 4 of the Constitution, the President had to certify it if the same bill was submitted for authentication for the second time.

“If the President returns a bill with a message, both Houses will reconsider such a bill and if such a bill is passed as presented or resubmitted with amendments, the President will certify it within fifteen days of its submission,” according to the Constitution.
Earlier on August 14, President Bhandari returned the citizenship bill that was passed by the House of Representatives and the National Assembly and sent for authentication.
Even though the President returned the bill to the House for reconsideration, the House of Representatives and the National Assembly made no changes to the bill.
President Bhandari had mainly raised two issues while sending the bill back. She had mentioned that the bill was silent about the provision of naturalized citizenship through marriage as per Article 11(6) of the Constitution.
“If a foreign woman married to a Nepali citizen so wishes, she may acquire naturalized citizenship of Nepal as provided for in a Federal law,” states Article 11(6) of the Constitution. President Bhandari had pointed out that the Constitution clearly says federal law but the bill passed by the national parliament did not have that provision.
While returning the bill, President Bhandari also questioned the provision requiring self-declaration by a woman to provide citizenship to her children. She also drew House’s attention to other issues but had mainly asked the House to reconsider the two issues.
There is a provision in the bill that ‘In the case of a person who was born in Nepal to a Nepali citizen mother and resides in Nepal and whose father has not been identified, he and his mother must make a self-declaration that his father could not be identified’.
But at the time of filing the application, if the mother of such a person has died or is not mentally stable, the law also provides that the applicant must make a self-declaration with evidence. The word ‘self-declaration’ has been kept in other sections of the Act.
Similarly, President Bhandari also discussed the issue of naturalized citizenship. She discussed these and other questions focusing on whether naturalized citizenship is a good practice in other countries or not. How is it for our country? Is this practice good or not?
The president also discussed whether or not federal laws are needed for citizenship as mentioned in the constitution.
In Article 11 of the Constitution, there is a provision regarding the recognition of citizenship of Nepal. Article 113 of the Constitution mentions the subject of Bill Verification and Article 114 of the Ordinance. (ANI)