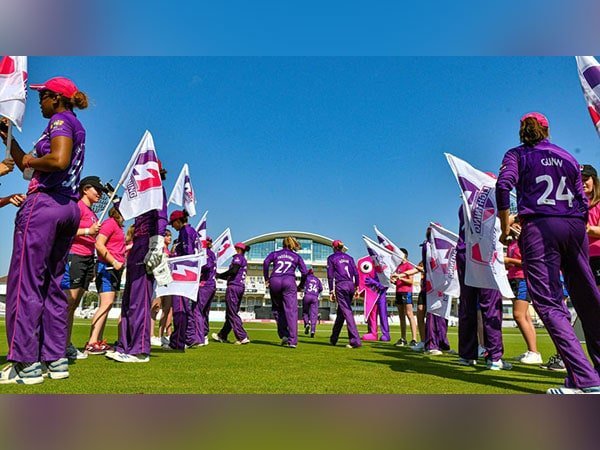 London [UK], September 17 (ANI): Nottinghamshire County Cricket Club has been announced as the East Midlands host in the England Cricket Board (ECB) women’s regional structure, replacing Loughborough University, who have been one of the eight hosts since the structure came into place in 2019.
From November 1 the Senior Women’s Team currently known as Lightning, along with an open-age year-round Academy, will be based primarily at Trent Bridge.
Mick Newell, Nottinghamshire’s Director of Cricket, said in an official statement released by Nottinghamshire CCC: “Seeing the growth of women’s cricket has been one of the biggest pleasures of being involved in the game in recent years. We’ve been fortunate to be heavily involved in that as a host venue for Trent Rockets, as well as welcoming Lightning to play 50-over and T20 cricket at Trent Bridge.”

“This feels like the perfect time to take our commitment to women’s cricket forward. We’re sure that the players, coaches and support staff will feel inspired by being at Trent Bridge, and we believe that access to our world-class facilities and the knowledge of our existing coaching and support staff will assist us in developing and attracting talent,” he added.
“Our neighbouring counties will continue to host fixtures in the Charlotte Edwards Cup and the Rachael Heyhoe Flint Trophy, and we will collectively build a regional player pathway based at schools and clubs throughout the East Midlands. We’re all committed to improving the strength and depth of the female talent pool and providing a clear and visible route for the most talented girls from Nottinghamshire, Derbyshire, Leicestershire and Lincolnshire to progress from their own County Age Group teams into a regional structure,” Newell said.
“We hope that the added exposure we can give to the new regional structure can help to raise the profile of women and girls’ cricket throughout the East Midlands and deliver tangible long-term results.”
The tender process, from which Nottinghamshire emerged successful, came after the university – in conjunction with the ECB – decided that the future development of the programme is now best served at a county cricket club.
Jo Kirk, Head of Women’s Domestic Cricket for the England and Wales Cricket Board, said: “We’re really looking forward to working with the team at Nottinghamshire as they take the lead for their region, working alongside their partner counties. The continued growth of the women’s regional structure, and the impact it has had on the overall health of women’s cricket in England and Wales, is something of which we are very proud.” (ANI)