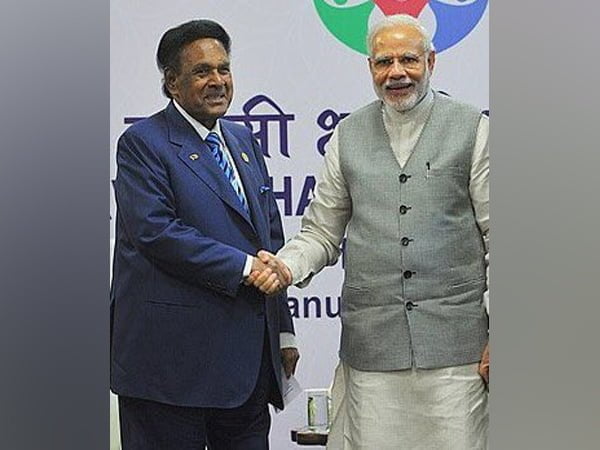 New Delhi [India], September 15 (ANI): Prime Minister Narendra Modi expressed grief over the passing away of former Cabinet Minister and first Pravasi Bharatiya Samman Awardee from Malaysia, S. Samy Vellu who died at the age of 86 on Thursday.
In a tweet, the Prime Minister said, “Saddened by the passing away of Tun Dr S. Samy Vellu, Former Cabinet Minister of Malaysia and the first Pravasi Bharatiya Samman Awardee from Malaysia. Heartfelt condolences to his family. Om Shanti.”
Malaysian politician Samy Vellu served as Minister of Works from June 1983 to June 1989 and again from May 1995 to March 2008. He held the post of Minister of Energy, Telecommunications from June 1989 to May 1995.

He also served as the Minister of Works and Public Amenities from September 1979 to June 1983 and was the Member of Parliament (MP) for Sungai Siput from September 1974 to March 2008.
Samy Vellu was appointed as Malaysia’s Special Envoy of Infrastructure to India and Southern Asia, with ministerial rank, on 1 January 2011.
Samy was the longest-serving MIC president after holding the position for 31 years from 1979 and one of the longest-serving Cabinet ministers by being in the Cabinet for 29 years. Samy Vellu served under three prime ministers during his time in the Cabinet – Hussein Onn, Dr Mahathir Mohamad and Abdullah Ahmad Badawi. (ANI)