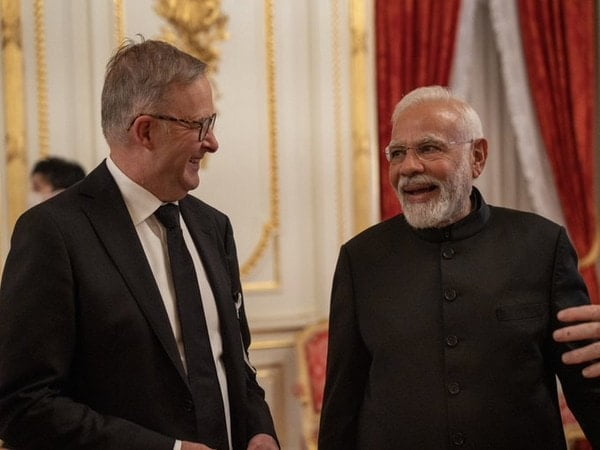 Tokyo [Japan], September 27 (ANI): Prime Minister Narendra Modi on Tuesday met Australian Prime Minister Anthony Albanese and noted that both the countries will keep working closely to boost their friendship in diverse sectors.
“Had productive talks with PM Anthony Albanese in Tokyo. We will keep working closely to boost the India-Australia friendship in diverse sectors,” PM Modi tweeted.
PM Modi landed in Japan on Tuesday morning to attend the State funeral of late Japanese PM Shinzo Abe which was held today at Nippon Budokan in Tokyo. Several top world leaders were present at the funeral.
The Australian Prime Minister also said that he discussed the important relationship between both countries.
“Met with Narendra Modi in Tokyo and discussed the important relationship and friendship between Australia and India,” he said in a tweet.

“Real progress is possible only if our efforts are inclusive, green, led by communities, and catalysed by agile policies and leadership–all attributes of the emerging yet distinct India story,” said Samir Saran, President, Observer Research Foundation.
Australia is a key partner of India on many fronts. In the first week of July, Australia confirmed that it would commit the Australian Dollar (AUD) 5.8 million to the three-year India-Australia Critical Minerals Investment Partnership.
India and Australia agreed to build a stronger partnership in the field of critical minerals which are crucial for clean energy technologies such as batteries, electric vehicles, as well as mobile phones and computers.
India and Australia have strengthened cooperation on the development of critical minerals projects and supply chains.
On April 2, India-Australia signed the free trade pact, rooted in a desire to reduce its economic dependence on the world’s No. 2 economy, China.
The last official visit was from the Australian side when Defence Minister Richard Marles arrived in India on June 20 to strengthen defence and security cooperation between both countries. (ANI)