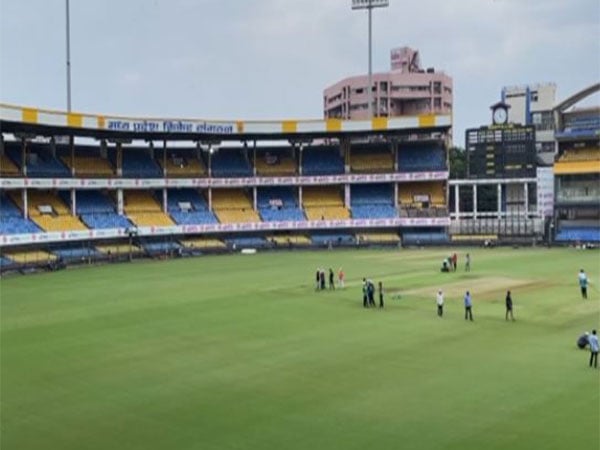 Indore (Madhya Pradesh) [India], September 30 (ANI): Preparations for the third T20I match between India and South Africa are in full swing at Indore’s Holkar Stadium as the city prepares itself for some high-voltage cricket action.
India is going to face the South African team in the cleanest city of India in the final T20I of the three-match series on October 4.
The Madhya Pradesh Cricket Association (MPCA) secretary Sanjeev Rao shared the enthusiasm the people of Indore have for the match. He stated that the 27,000-capacity stadium would be fully occupied during the game as fans will flock to see their favourite stars in action.
“There is a lot of enthusiasm among the people seeing that the match is going to be held in Indore after about two and a half years. The stadium has a capacity of 27,000 people. There is no doubt that the stadium will be completely full. But it is expected that the weather will be favourable because according to the weather forecast, there is no chance of rain that day,” Madhya Pradesh Cricket Association (MPCA) secretary Sanjeev Rao told ANI.

The secretary called the Holkar stadium lucky for the Indian team as they have not lost any match there and also shared the plans in place for any rain hindrance.
“Still our preparations for the rain are complete, if it rains before the match, we can cover the stadium and prepare to play again in 1 hour after the rain stops. This stadium is considered lucky for India, India has not lost any match here, and on 4 October also Team India will win. The public is also very excited to cheer up the team,” he added.
India are leading the three-match T20I series against South Africa 1-0.
The Rohit Sharma-led side will next face Proteas in the second T20I in Guwahati on October 2 followed by the third T20I in Indore on October 4 (Tuesday).
India squad for South Africa T20Is: Rohit Sharma (Captain), KL Rahul (vice-captain), Virat Kohli, Suryakumar Yadav, Rishabh Pant (wicket-keeper), Dinesh Karthik (wicket-keeper), R. Ashwin, Yuzvendra Chahal, Axar Patel, Arshdeep Singh, Harshal Patel, Deepak Chahar, Umesh Yadav, Shreyas Iyer, Shahbaz Ahmed and Mohammed Siraj. (ANI)

I am back home, says Shane Watson after landing in Jodhpur for Legends League Cricket