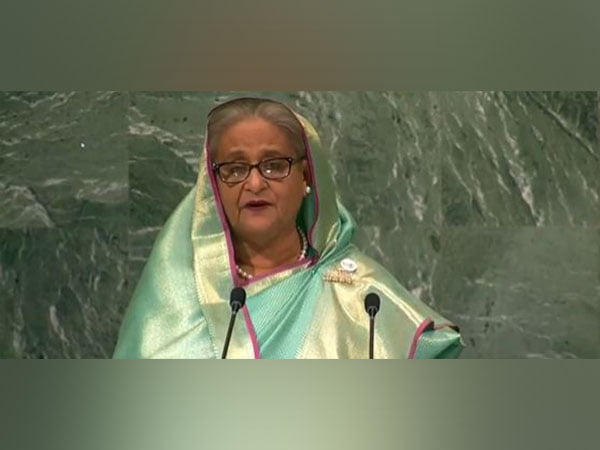 New York [US], September 24 (ANI): The Rohingyas refugees are causing serious ramifications on Bangladesh’s economy, environment, security and socio-political stability of the country, Prime Minister Sheikh Hasina said and urged United Nations to play an “effective role” in this matter.
While addressing the 77th session of the United Nations General Assembly, Bangladesh PM said, “Prolonged presence of Rohingyas in Bangladesh has caused serious ramifications on the economy, environment, security and socio-political stability.”
PM Hasina, who is also in New York to attend the UNGA, said that the uncertainty over the repatriation led to widespread frustration in the country and cross-border organised crimes including human and drug trafficking are also rising.
“The situation can even potentially fuel radicalization. If the problem persists further, it may affect the security and stability of the region and beyond,” PM Hasina added.
Remembering the five years of 2017 mass exodus of the Rohingyas to Bangladesh from Myanmar, Hasina said that despite the engagements with Naypyidaw and engagements with the UN, “not a single Rohingya was repatriated to their ancestral homes in Myanmar.”
“The ongoing political turmoil and arms conflict in the country has made the repatriation of Rohingya even more difficult. I hope the UN will play an effective role in this regard,” she added.
“We need to prove that in times of crisis, UN is the cornerstone of the multilateral system. Therefore, in order to gain the trust and confidence of the people at all levels, the United Nations must lead from the front and work to fulfil the expectations of all,” she said.
She further said, “Bangladesh believe that antagonism like war or economic sanctions, counter-sanctions can never bring good to any nation. Dialogue is the best way to resolve crises and disputes.”
Hasina today gave utmost importance on dialogue to resolve crises and disputes, urging the world community to stop arms race, war and sanctions for building a peaceful world.
“My urge to the conscience of the world community- stop the arms race, war, and sanctions, ensure food and security of the children; build peace,” she said.
She continued that “We believe without addressing root causes of conflict, we cannot sustain peace.”
Wanting to see a peaceful world with enhanced cooperation and solidarity, shared prosperity and collective actions, Sheikh Hasina said “We share one planet, and we owe it to our future generations to leave it in a better shape.”
During her last visit to India this month, Bangladesh’s PM talked about the Rohingyas and said that the Rohingya migrants are a “big burden” on Bangladesh and the country is reaching out to the international community to ensure they return to their homeland.
In an interaction with ANI, Hasina confessed that the presence of lakhs of Rohingyas in Bangladesh had created challenges for her regime.
“Well you know… for us it’s a big burden. India is a vast country; you can accommodate but you don’t have much. But in our country… we have 1.1 million Rohingya. So well… we are consulting with the international community and also our neighbouring countries, they should also take some steps so that they can go back home,” Hasina said.
The Bangladesh prime minister said that her government had tried to take care of the displaced community keeping the humanitarian aspect in mind.
Bangladesh has in the past faced a big influx of Rohingya from Myanmar’s Rakhine state.
Last month in August, Bangladesh witnessed 5 years of Rohingya mass exodus from Myanmar. (ANI)