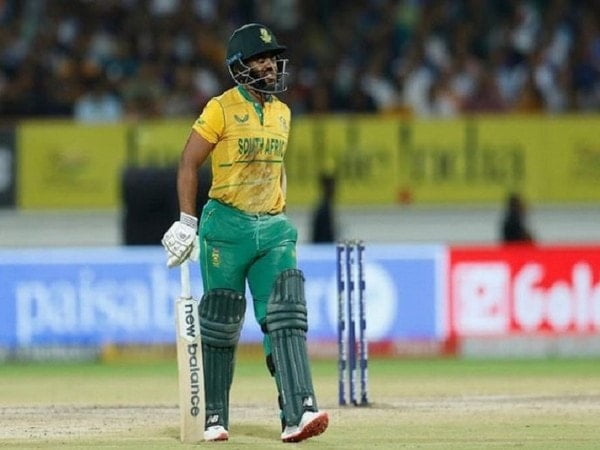 Thiruvananthapuram (Kerala) [India], September 28 (ANI): Ahead of the first T20I against India in Thiruvananthapuram, South African skipper Temba Bavuma said that he is expecting the series to be a strong and competitive one.
The three-match T20I series between India and South Africa will kick off today from Thiruvananthapuram, followed by two more T20Is on October 2 and October 4. Following this, from October 6 to October 11, both teams will also play three one-day internationals.
“We are expecting it to be a good series, a competitive one, as it always is when we play India. The last time we were here, we were tested and challenged in all departments of our game and I think we replied to it quite well. So I expect a good, strong and competitive series,” said Bavuma in a pre-match press conference.
The skipper said that this will be their last series before ICC T20 World Cup 2022 and the team is looking to fill up whatever gaps it has.
“We have guys who have been playing a lot of cricket and I guess we will be managing their intensity. We also have guys who need some cricket under their belts. It will be to give those guys some game time because this is our last preparation in different conditions compared to Australia but still match time nevertheless,” he added.
After hosts India’s 2-1 series win over Australia at home, Bavuma said that he expects the Men in Blue to come good.

“It will be good for us to come up against their best,” he added.
South Africa is placed in Group 2 in the World Cup along with Bangladesh, Pakistan, India and two qualifying teams who will advance to the Super 12 phase after the first round.
The Proteas’ last T20 World Cup campaign in 2021 ended in heartbreak as despite winning four of their five matches, they missed out on the semifinal spot due to an inferior net run rate as compared to England and Australia.
South Africa squad – ICC Men’s T20 World Cup Australia 2022 and T20I series against India
Temba Bavuma (captain), Quinton de Kock, Reeza Hendricks, Heinrich Klaassen, Keshav Maharaj, Aiden Markram, David Miller, Lungi Ngidi, Anrich Nortje, Wayne Parnell, Dwaine Pretorius, Kagiso Rabada, Rilee Rossouw, Tabraiz Shamsi, Tristan Stubbs.
Travelling Reserves
Bjorn Fortuin, Marco Jansen and Andile Phehlukwayo. (ANI)