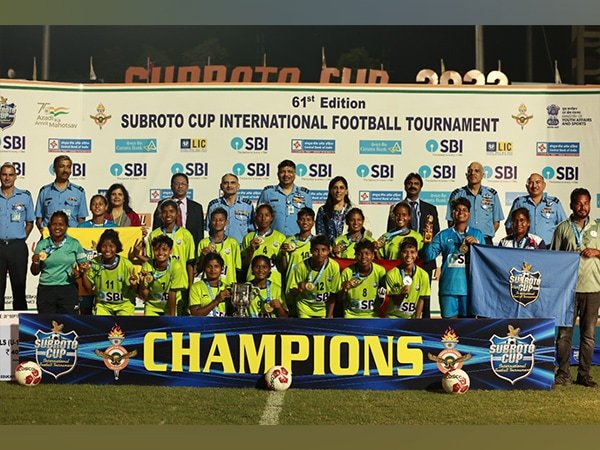 New Delhi [India], September 30 (ANI): St. Patrick’s of Gumla, Jharkhand won the 61st Subroto Cup International Football Tournament Girls U-17 title beating Wangoi Higher Secondary School, Imphal, Manipur 3 – 1 in the final here at the Dr. Bhimrao Ambedkar Stadium.
The winners received their trophies from Chief Guest Air Marshal Sandeep Singh, PVSM AVSM VM ADC and Vice Chief of Air Staff, Indian Air Force. Sakshi Malik, Olympic bronze and Commonwealth Gold medallist was present as Guest of Honour providing encouragement to the young girls.
Both teams played some entertaining football with the crowd behind them. St. Patrick’s, Jharkhand took the lead early in the 5th minute through Anita Dungdung who finished brilliantly in the top corner. Wangoi Higher Secondary School equalized in the second half through TH Remi in the 52nd minute. The match was stretched to extra time where the Jharkhand school found the extra leg to find the net twice. Both goals were scored by Alpha Kandulna in the 69th and 71st minutes.

Speaking on the occasion, Air Marshal Sandeep Singh, PVSM, AVSM, VM, ADC, Vice Chief of Air Staff, Indian Air Force said, “Subroto Cup is a great platform for school children to showcase their skills in a national level. It can be considered as the first step for their career as all of the girls playing here will be noticed by footballing institutions and organisations for them to take the next step in their journey. I congratulate not only the winners today, but also all the teams and their coaches and support staff for the admirable effort you have put in to reach this far. I wish you all the best for the future and am confident that the Subroto Cup experience will enthuse you to reach even greater heights going forward.”
Sakshi Malik provided encouragement to the budding footballers saying, “Subroto Cup is an excellent opportunity for young girls to be noticed in a national level. It is great that the Indian Air Force is conducting such a grassroots tournament and I hope that more tournaments of this sort are conducted that will provide more opportunities and bring young and talented girls to the forefront. I wish all the teams that participated in the tournament especially the teams that played the finals here.”
The 61st Subroto Cup now moves on to the Boys U-17 tournament which begins on October 3 with the final scheduled for October 13. (ANI)

Green’s recent blitz in T20Is is not a surprise for us: Marsh