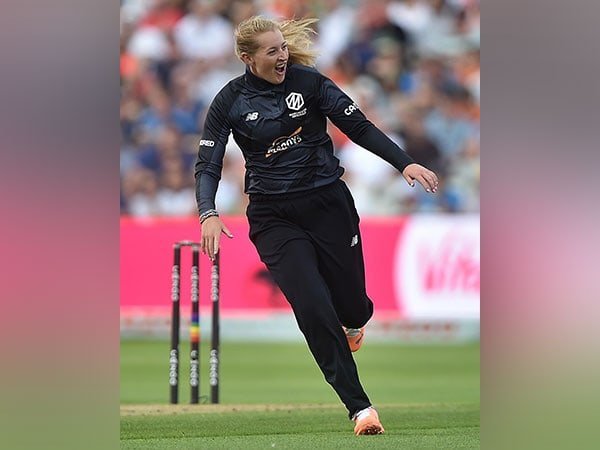 Melbourne [Australia], September 13 (ANI): Sydney Sixers have signed World No.1 ranked T20I bowler Sophie Ecclestone for the Women’s Big Bash League season 8.
Since making her international debut against Pakistan in 2016 as a 17-year-old, Ecclestone has forged her reputation as the world’s premier T20I bowler via her 78 wickets from only 58 matches.
“They play in my favourite colour – so that’s a great start,” said Ecclestone said in an official statement released by Sydney Sixers.
“Obviously they have great players with the likes of [Alyssa] Healy, [Ellyse] Perry and [Ash] Gardner, so I’m really excited about going over and playing with them,” she added.
“It’ll be nice not to have to bowl at them… it’s nice they’ll be on my team for once! I’m excited [by the thought of getting] to know them and to start training with them and play in the same team,” Ecclestone said.
While coach Charlotte Edwards said she was “delighted” to secure Ecclestone’s unerring accuracy and tight economy rate, the 23-year-old from Cheshire in northwest England confessed she also had good reason to feel tickled pink.
Edwards said Ecclestone was primarily targeted to fill a need in the Sixers line-up, adding the left arm’s proven record in Australian conditions means she should start the season brimming with confidence.

“Sophie is the [world’s] leading T20 bowler – her record over the past few years speaks for itself – and we’re delighted to have her at the Sixers. In my opinion, we have recruited the best,” said Edwards.
“She can bowl in all phases of the game; she has the ability to take wickets at crucial times, and she can minimise the run-scoring at all times. I know the WBBL is a competition Sophie wants to play in, and the fact she’s had lots of experience playing in Australia will hold her in good stead,” she added.
Ecclestone’s efforts during the 2019 World T20 Cup suggest she’ll feel right at home bowling in Australia. During that tournament, she took eight wickets in four matches at a phenomenal economy rate of 3.23 runs per over.
The spin wizard, who has said she dreams of one day becoming a pilot, said it pleased her to know that she is headed for a competition she’s always wanted to test herself in.
“It’s been a long time coming,” she said of playing in the WBBL. I’ve been meaning to go for a few years now. I’m so excited that, this year, it’s worked out well and I can get over there. I’ve seen a lot of it. A few of the England girls have been over in the past and they’ve loved the competition. I’ll hopefully enjoy myself!” she said.
Besides her bowling prowess, Ecclestone is also a big-hitting lower-order batter blessed with the ability to hit towering sixes. She appreciates coach Edwards will give her a license to thrill with the willow during her time with the Sixers.
“It’s nice [Edwards] backs my batting and my bowling. Hopefully, I can contribute as an allrounder,” said Ecclestone.
Contracted Players: Ellyse Perry (C), Jade Allen, Nicole Bolton, Maitlan Brown, Erin Burns, Stella Campbell, Lauren Cheatle, Sophie Ecclestone, Ash Gardner, Ange Genford and Alyssa Healy. (ANI)