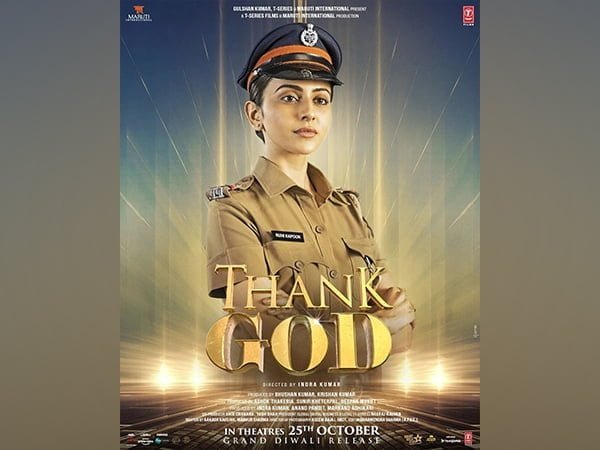 In the poster, the ‘Runway 34’ actor could be seen in the role of a cop.
Apart from Rakul, the film also stars Ajay Devgn and Sidharth Malhotra.
Previously, the makers unveiled the trailer and first posters of actors Ajay and Sidharth, which received positive responses from the audience.
Helmed by Indra Kumar, ‘Thank God’ is an upcoming comedy film which is slated to release on October 25, 2022.
The film marks Ajay and Rakul Preet Singh’s third collaboration after ‘De De Pyaar De’ and ‘Runway 34’.
‘Thank God’ will be facing a big Bollywood clash, on the occasion of Diwali 2022, with Akshay Kumar’s upcoming film ‘Ram Setu’ which also stars Jacqueline Fernandez and Nusshratt Bharuccha in the lead roles.
Meanwhile, Rakul was recently seen in a thriller film ‘Cuttputli’ alongside Akshay Kumar, which premiered exclusively on Disney+ Hotstar.
She will be also seen in an upcoming comedy film ‘Doctor G’ opposite Ayushmann Khurrana and as the female lead in RSVP’s ‘Chhatriwali’.
Ajay, on the other hand, will be also seen in Boney Kapoor’s upcoming sports period film ‘Maidaan’, in his next directorial film ‘Bholaa’ alongside actor Tabu, which is an official Hindi remake of a south film, and in ‘Drishyam 2’ which is all set to hit the theatres on November 18, 2022.
Meanwhile, Sidharth will be next seen in an upcoming action film ‘Yodha’ alongside Disha Patani and Rashi Khanna and in ‘Mission Majnu’ opposite south actor Rashmika Mandanna. (ANI)

ALSO READ:  Forever in our hearts: Bollywood mourns the demise of Raju Srivastav