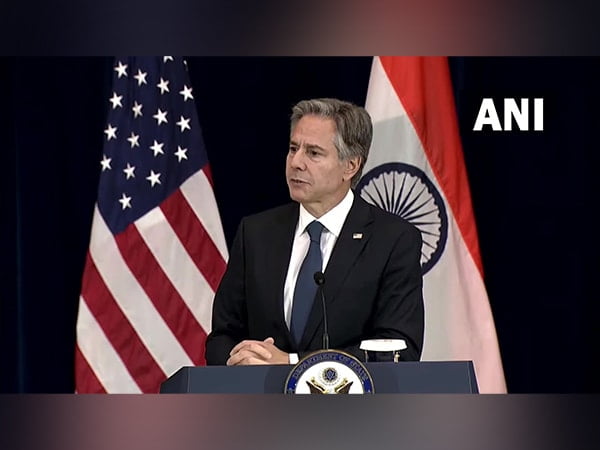 ANI Photo | This is a sustainment program for F-16s that Pakistan has long had: Blinken

Washington [US], September 28 (ANI): US Secretary of State Antony Blinken highlighted several issues including the ongoing Ukraine conflict, the Indo-Pacific situation, during a joint press conference with External Affairs Minister S Jaishankar on Tuesday.
Speaking over the Pakistan F-16 row, the US official said: “This is a sustainment program for F-16s that Pakistan has long had. These are not new planes, new systems or new weapons. It is sustaining what they have. We have a responsibility and an obligation to whomever we provide military equipment to…to make sure that its maintained. Pakistan’s program bolsters its capability to deal with terrorist threats,” Blinken said in response to a query.
Earlier has raised questions over the “merits” of the US-Pakistan relationship and said that Washington’s ties with Islamabad have not served the “American interest”.
“It’s a relationship that has neither ended up serving Pakistan well nor serving the American interests,” Jaishankar said at an event organized by the Indian American community in Washington on Sunday.
Earlier today, Jaishankar discussed new opportunities for bilateral defence industrial cooperation with US Defence Secretary Lloyd Austin.

Defence Minister Rajnath Singh promptly had conveyed to US Defence Secretary Lloyd Austin India’s concerns over Washington’s decision to provide a sustenance package for Pakistan’s F-16 fleet.
“It’s really for the United States today to reflect on the merits of this relationship and what they get by it,” Jaishankar asserted.
Speaking over India Pakistan relation, Blinken said that US “always encourage our friends to resolve difference through dialogue”
Both leaders highlighted the Indo-US ties, with the US official adding that the partnership between the two democracies was “one of the most consequential in the world”.
In his remarks, Antony Blinken referred to remarks made by Prime Minister Narendra Modi during his meeting with Russian President Vladimir Putin on the sidelines of the SCO summit.
“I really want to emphasize on what PM Modi said, I think he captured, as well as anyone I have heard, fundamentally what this moment is about as he said, this is not an era, the time for war and we could not agree more,” he said.
PM Modi, in his remarks during the meeting with Putin, had noted that India and Russia have stayed together for several decades. (ANI)