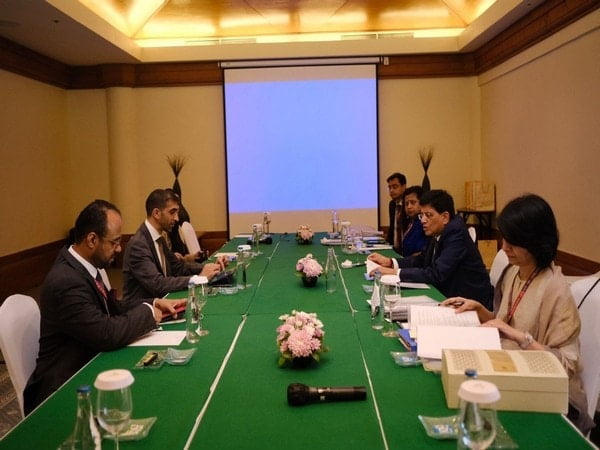 Bali [Indonesia], September 22 (ANI): Union Minister for Commerce Piyush Goyal Thursday met with the UAE Minister of State for Foreign Trade Thani bin Ahmed Al Zeyoudi and held discussions to bolster the trade and investment ties between the two countries.
The meeting occurred on the sidelines of the Group of 20 (G20) nations’ trade, investment, and industry ministerial meeting.

In a tweet, Goyal wrote, “Delighted to meet UAE Minister of State for Foreign Trade Thani bin Ahmed Al Zeyoudi at G20, Indonesia. Took stock of the progress under the India-UAE Comprehensive Economic Partnership Agreement and discussed further strengthening of our trade and investment ties.”

Earlier, Piyush Goyal met with the US trade representative Katherine Tai and held discussions on World Trade Organization Dispute Settlement Reforms and exchanged ideas on ways to strengthen the mechanism making it more efficient.
The meeting came ahead of the G20 Summit which will be hosted by Indonesia in Bali in the month of November.
India’s G-20 Presidency next year will be a golden chance for the country to correct the long-standing anomalies that go against the developing countries, especially in the domain of agriculture and food subsidies, SBI.
Research said in its latest report. India is going to hold the G20 presidency from December 1, 2022, to November 30, 2023. Piyush Goyal also held a meeting with the Executive Vice President of the European Commission Valdis Dombrovskis and discussed on expediting Free Trade Agreement negotiations which will benefit both sides.
“Met Executive Vice President of the European Commission Valdis Dombrovskis on the sidelines of G20 Indonesia. Both sides are keen to expedite FTA negotiations with mutually beneficial results,” he added.
Minister Piyush Goyal on Tuesday said the UK is keen to stick to the Diwali deadline for India-UK free trade agreement and both countries are working towards it. He referred to the passing away of Queen Elizabeth II and said “as we are expanding our engagements, the UK is at a cusp”.
“Two days ago, I received a letter from the UK again reiterating that they want to stick to the Diwali deadline (for the India-UK Free Trade Agreement),” Goyal said at an event here.
Speaking of India’s engagements and the quest to become self-reliant, Goyal said, “If we don’t engage with the international market, we are the losers…Today the whole world is talking of Atmanirbhar…There is no power that can stop us from becoming a developed nation in the next 25 years…The world wants to engage with us, the world has more confidence in us than we have.”
Earlier, in the day, British High Commissioner to India, Alex Ellis said that India and the United Kingdom have the high ambition of completing the Free Trade Agreement (FTA) by Diwali this year. (ANI)