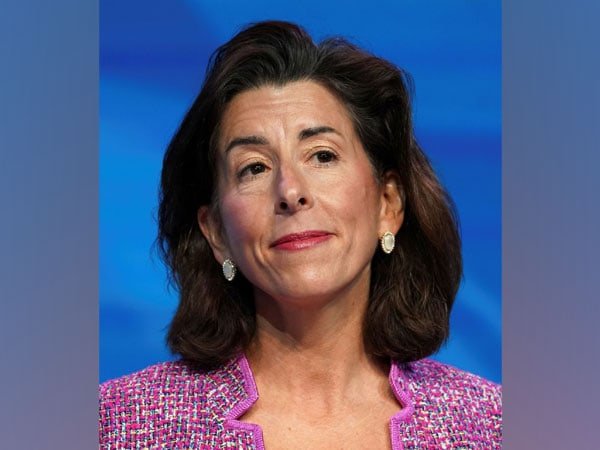 Washington [US], September 28 (ANI): US Secretary of Commerce Gina Raimondo met with External Affairs Minister S Jaishankar on Monday to discuss the US-India commercial relationship and welcomed the government of India’s participation in the Indo-Pacific Economic Framework for Prosperity (IPEF).
The US Secretary also appreciated Jaishankar’s views on IPEF going forward and emphasized the need for an ambitious and high-standard outcome as she underlined working closely with India in the discussions ahead, the official statement by US Department of Commerce read.
Secretary Raimondo and Jaishankar agreed that both the CEO Forum and the US-India Commercial Dialogue are key opportunities to strengthen the commercial partnership between the two countries and to advance progress on issues relevant to the economies of both India and US, teh press release added.
Both the ministers met on Monday and discussed Indo-Pacific Economic Framework alongside high technology cooperation between the two countries.
The talks between the two ministers also covered resilient supply chains, high technology cooperation, semiconductors and business promotion in Washington as Jaishankar is in the US on a 10-day visit to hold bilateral consultations with several US cabinet ministers.

In a tweet, Jaishankar wrote, “An excellent meeting with Commerce Secretary
@SecRaimondo. Our conversation covered resilient supply chains, Indo-Pacific Economic Framework, high technology cooperation, semiconductors and business promotion. Look forward to seeing her in India.”
Notably, External Affairs Minister, Jaishankar also met US Secretary of Defense Lloyd Austin at the Pentagon where he was welcomed in an enhanced honour cordon ceremony on Monday.
The External Affairs Minister concluded the high-level United Nations General Assembly debate in New York on Saturday. Jaishankar was in New York from September 18 to 24.
IPEF, a group of 13 countries, is a multilateral economic framework. Since its launch in May launch, IPEF countries have engaged in intensive discussions to scope out each pillar of the Framework.
The Indo-Pacific Economic Framework for Prosperity (IPEF) was launched jointly by the USA and other partner countries of the Indo-Pacific region on May 23, 2022, in Tokyo.
India joined the IPEF and Prime Minister Narendra Modi attended the launch event along with US President Joe Biden, Japanese Prime Minister Kishida Fumio and other leaders from partner countries. Previously, virtual Ministerial Meetings were held immediately after the launch on May 23 and thereafter from July 26-27, 2022. (ANI)

India’s approach to Ukraine conflict will continue to be human-centric: UN envoy Kamboj