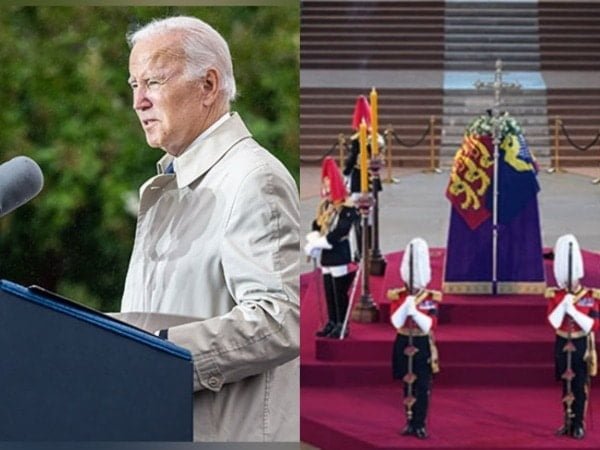 Washington [US], September 17 (ANI): US President Joe Biden and First Lady Jill Biden on Friday (local time) will depart for the UK to attend the funeral of Queen Elizabeth II. The latter breathed her last on September 9.
In the morning, the President and the First Lady will leave the White House and reach Joint Base Andrews to depart for London. The departure from the South Lawn will be open press, read a White House press release.
The President and the First Lady will pay respects to Her Majesty Queen Elizabeth II on Saturday. Both of them will sign the Official Condolence Book for Her Majesty Queen Elizabeth II at the venue.
They will also attend a Reception hosted by His Majesty King Charles III.
Biden and Jill will attend the State Funeral of Her Majesty Queen Elizabeth II at Westminster Abbey on September 19 and depart for the US on the same day, said the release.
All heads of state visiting London for Queen Elizabeth’s funeral have been invited to attend the lying-in-state in Westminster Hall ahead of Monday’s state funeral and to sign a book of condolences at Lancaster House.
However, opening a fresh diplomatic rift with Beijing, a Chinese government delegation has been refused permission by the House of Commons authorities to attend the queen’s lying-in-state in Westminster Hall, London, Politico reported citing a senior parliamentary figure familiar with the matter.
People of the UK will relive the glorious life and legacy of Queen Elizabeth II at her state funeral on Monday.
For the funeral, many guests from political heads of countries to distinct royal family members and dignitaries from across the globe will fly to the UK.

Although the official guest list hasn’t been released yet, New York Post has shared the names of a few countries that didn’t make the cut. They are – Russia, Belarus, Afghanistan, Myanmar, Syria and Venezuela.
According to the online publication, Russian President Vladimir Putin wished King Charles III on his accession recently, however, the country was still snubbed by the UK as they reportedly didn’t get an invite for the funeral.
It’s also interesting to note here that North Korea, Iran, and Nicaragua were sent invites however those were only sent out to their ambassadorial representatives and not the head of state.
Another news that recently made rounds was that former US President Donald Trump would also be in attendance however, the UK government, according to New York Post, has squashed the rumour saying that only the sitting US President and his wife will be attending.
New York Post further reports that 750,000 people will be present at the funeral.
More than USD 7 million (around INR 59 crores) will be shelled to beef up the security for the Queen’s funeral on September 19.
According to New York Post, protecting Queen Elizabeth’s funeral will be the most expensive single-day operation in UK history, costing over USD 7.5 million.
To secure the unprecedented number of foreign leaders, who are expected at the funeral on Monday, the British Mi5 and Mi6 intelligence agencies, London’s Metropolitan Police, and the Secret Service will work together.
“This is the biggest policing operation that the United Kingdom policing has ever undertaken,” New York Post quoted Simon Morgan, a former Royal security officer, as saying. (ANI)