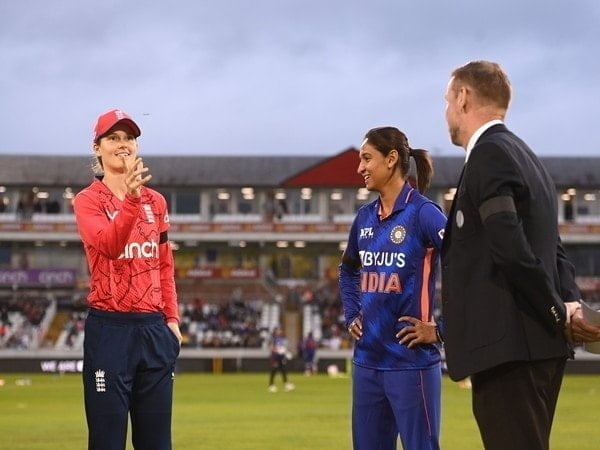 Durham [UK], September 11 (ANI): After a thumping nine-wicket loss to England on Saturday, India captain Harmanpreet Kaur said that the side “forcefully played” in wet conditions in the first T20I against the Three Lions in Chester-le-Street.
India suffered a crushing defeat at the hands of England on Sunday in a rain-affected match on Saturday.
Sophia Dunkley’s unbeaten 61 anchored their chase in the second innings after Sarah Glenn took 4 for 23, the legspinner’s best figures in T20Is, to confine India’s hitters on a rainy night in Durham.
“We were not able to get the runs we were expecting. I just feel we forcefully played because it conditions were not 100 per cent fit to play,” said Harmanpreet Kaur in a post-match presentation.

Despite facing defeat the Indian captain backed her team and said that despite the wet conditions which could have resulted in injuries anytime, she is happy with her team’s performance.
“I am happy the girls put in the effort and they played despite there being chances of getting injured,” she added.
Harmanpreet was vocal about the poor fielding conditions in the second innings, with the ground being wet making life difficult for the Indian fielders. She was happy with the efforts put by the team and rued the injury to Radha Yadav which forced her out of the game.
“You need to have teammates that play in whatever conditions. It was not 100% condition, the ground was too wet and there were chances of getting injured. And one of our fielders got injured and we turned out one bowler short,” said Harmanpreet.
India will now face the English side in the second T20I of the three-match series on September 13 and will look to level the series. (ANI)