We were 10-15 runs short, bowlers were outstanding: Babar after Pakistan’s win over England in fourth T20I 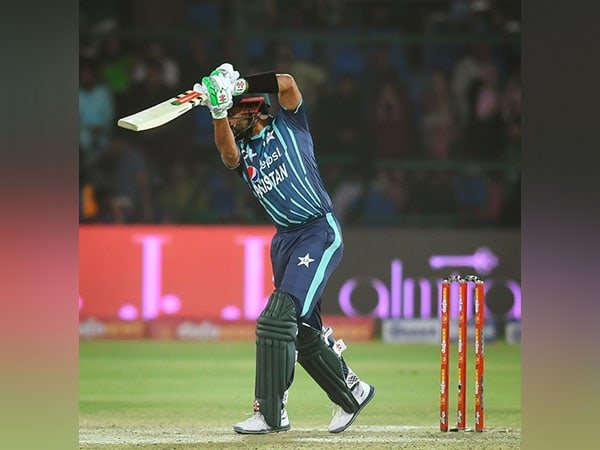 ANI Photo | We were 10-15 runs short, bowlers were outstanding: Babar after Pakistan’s win over England in fourth T20I

Karachi [Pakistan], September 26 (ANI): Following his side’s three-run win over England in the fourth T20I, Pakistan skipper Babar Azam admitted that his side fell about 10-15 runs short with the bat.
Mohammad Rizwan’s explosive half-century and pacer Haris Rauf’s fiery spell helped Pakistan clinch a thrilling three-run win over England in the fourth T20I at Karachi on Sunday.
“The way we started with the bat, we were about 10-15 runs short. Bowlers were outstanding for us. We are trying to keep our middle order flexible and use it according to the situation. In different games, we have tried different combinations. He (Rauf) is our key bowler, and he is getting even better day-by-day,” said Azam in a post-match presentation.
With this victory, Pakistan has levelled the seven-match T20I series 2-2.
In the first innings, Pakistan posted 166/4 in their 20 overs. Rizwan’s crafty 88 off 67 balls powered his side to a modest total. He partnered with captain Babar Azam (31) to make good use of powerplay and post 82 runs without a loss during the first ten overs.

But English bowlers did some tight bowling in the second half, sending back Azam, Shan Masood (21), Khushdil (2) and Rizwan himself. Pacer Reece Topley impressed with his spell of 2/37. David Willey and Liam Dawson got a wicket each.
Chasing 167, England was kept in the hunt by knocks from the likes of Harry Brook (34), Liam Dawson (34) and Ben Duckett (33), but wickets fell at regular intervals. England was looking in trouble at 7/130 at one point, but Dawson hit Mohammad Hasnain for 24 runs in the 18th over.
In the next over, Rauf sent back Dawson and Olly Stone, reducing England to 163/9.
In the final over, England needed to score four runs but Topley was run out, giving Pakistan a thrilling win by three runs.
Rauf (3/32) and Mohammad Hasnain (3/35) produced match-winning spells for Pakistan. Mohammad Wasim and Mohammad Nawaz also took a wicket each.
Rauf was named ‘Man of the Match’ for his spell. (ANI)