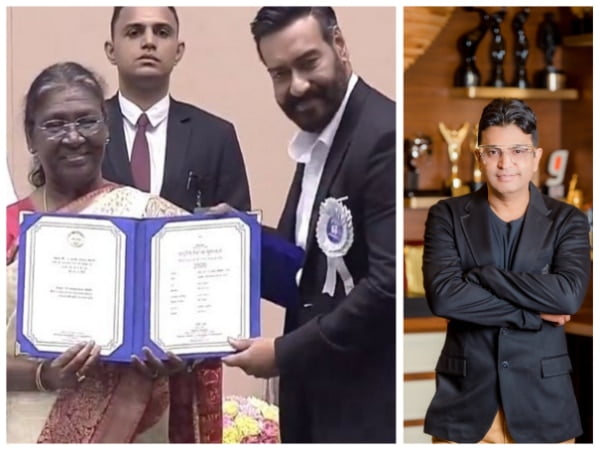 Mumbai (Maharashtra) [India], September 30 (ANI): Ajay Devgn won the National award for Best actor for his role in the film ‘Tanhaji: The unsung warrior’.
The actor received the award from President Draupadi Murmu on Friday in New Delhi. Apart from Ajay, another award that the filmmakers received was in the ‘Best Popular Film Providing Wholesome Entertainment’ category, and for having the Best costume.
Congratulating Ajay and Om Raut on occasion, the Producer of the film Bhushan Kumar said that he is happy two of his films won the prestigious National Award and that he couldn’t be happier.
Bhushan Kumar’s T-Series produced film ‘Toolsidas Junior’ also won the award for Best Hindi film.
Bhushan Kumar said, “We are grateful and truly honoured to be bestowed with the 68th National Award for our films Tanhaji: The Unsung Warrior and Toolsidas Junior, not just to the jury but also to the audience who admired our body of work so much that got us here. We would like to take this opportunity to express our gratitude to Ajay Devgn, Om Raut and Ashutosh Gowarikar for adding to the pride and honour of the T-Series through their tremendous contributions and wonderful work. Their creativity, sensitivity, intelligence, and understanding helped the films become much more than they otherwise would have been.”
He continued, “In addition to the directors, we would like to express our gratitude to each and every team member who contributed to the project’s success. Looking forward to creating many more such gems with A-team.”
‘Tanhaji: The Unsung Warrior’ was directed by Om Raut and released on January 10, 2020. This film was the 100th film in Devgn’s career spanning 30 years.

The movie also features Saif Ali Khan, Kajol and Sharad Kelkar. It collected over Rs 368 crore worldwide at the box office and was declared the highest grosser of the year.
The film involved Ajay in the role of Maratha warrior Taanaji Malusare, fighting for the principle of ‘Bhagwa’ (saffron) flag, ‘Swaraj’ (home-rule) and ‘Satya’ (truth).
Kajol essayed the role of the wife of Tanhaji — Savitribai Malusare — a strong character, who accompanied him in taking firm decisions. Saif played the antagonist, Uday Bhan, a Rajput official who works for Mughal Emperor Aurangzeb.
This win marks Ajay’s third National award after ‘Zakhm’ in 1998 and ‘The Legend of Bhagat Singh’ in 2020. Along with the ‘Golmaal’ actor, South star Suriya also won the Best Actor honour for ‘Soorarai Pottru’.
‘Toolsidas Junior’, on the other hand, was based on Snooker and stars late actor Rajiv Kapoor, Sanjay Dutt and Varun Buddhadev in lead roles. The film was set in Calcutta in 1994.
Written and directed by Mridul, ‘Toolsidas Junior’ marks Rajiv Kapoor’s last film before his demise. The film went on the floors in 2018.
Rajiv Kapoor, the youngest son of legendary Raj Kapoor, passed away on January 9, 2021, following a heart attack. (ANI)