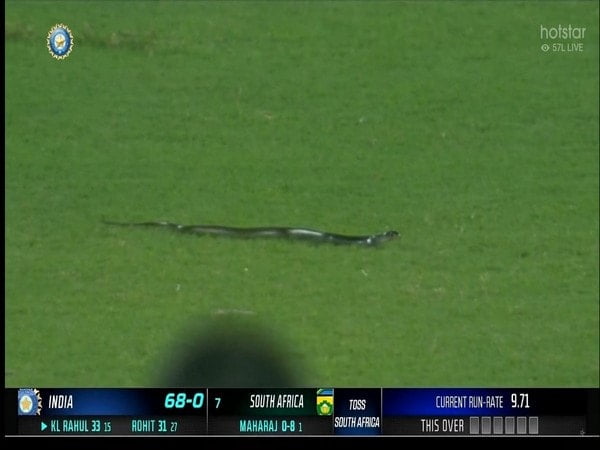 Guwahati (Assam) [India], October 3 (ANI): In some cricket matches it is streakers or intruders who disrupt the proceedings while in the recent T20 international between India and South Africa it turned out to be a snake, Assam Cricket Association (ACA) secretary Devajit Saikia said on Monday, adding that he believes the reptile enjoyed the game.
The second T20I between India and South Africa was halted after a snake invaded the cricket field, however, the match was resumed after a couple of minutes. The incident took place during the beginning of the seventh over of the innings in the second game of the three-match T20I series here at Barsapara Cricket Stadium, Guwahati on Sunday.
“Regarding the two incidents, which you want to say, snake crept into. In some places we see streakers, in some other places we see intruders into the ground from the stands. But here we have a different thing that is a snake. I am sure the snake was also enjoying the match and wanted a closer look of the players, ” said Saikia while addressing the media.
In a match where rain was expected to disrupt the proceedings, it turned out be a snake which brought the proceedings to a halt, even if only temporarily.

During the match, a couple of South African players pointed it out to KL Rahul and the on-field umpires. The ground staff then rushed in with the necessary equipment and sorted the problem in a couple of minutes. The players, meanwhile, took an unofficial drinks break.
“I am sure the snake was enjoying and trying to get a closer view of the players scoring runs. Six and fours from every ball. The snake must have been very unhappy when one of our curating members, Mr. Boro, he sprang into action in no time and caught hold of it and put him outside the playing arena, ” added Saikia.
There was also a floodlight failure that forced a halt of approximately 15 minutes during the match.
However, Saikia sought to dismiss the incident.
“I don’t think it is a big incident. One MCB tripped and it was put back to the normal position and I think as we don’t have LED system in the stadium. It was an all-metal system so we are going to replace in next two-three months time and to bring the light to its full form it takes about 10-15 minutes that is why delay was for 12-15 minutes, ” explained the ACA secretary. (ANI)