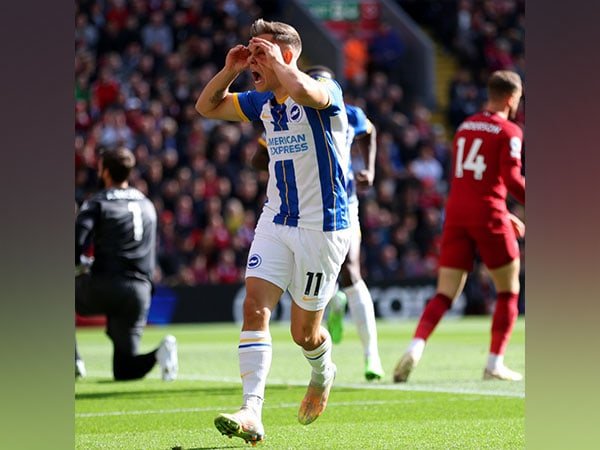 Liverpool [UK], October 2 (ANI): Leandro Trossard’s hat-trick denied Liverpool a win at Anfield, drawing the game against Brighton 3-3, the fourth stalemate of The Reds so far during their 2022-23 Premier League campaign.
Their chances of bringing home the Premier League crown under Jurgen Klopp are looking like a distant dream currently and have left their manager lamenting about yet another “rubbish start” as they fell down further to the table-toppers Arsenal, trailing them by 11 points at just ten, positioned at number nine in the table. On the other hand, Brighton continues their impressive campaign, positioned at number four with 14 points.
Trossard gave the visitors an advantage within the first 20 minutes, scoring twice. Alexander-Arnold’s slip was an opportunity for Trossard who pounced to collect Danny Welbeck’s flick and fired the ball into the far corner of the goal. In the 18th minute, he produced a similar strike to double the advantage for the visitors.
Roberto Firmino turned things in the 33rd minute, clipping the ball over Rober Sanchez from a pass by Mohamed Salah. The goal needed a VAR, but it stood nonetheless.
At half-time, the scoreline read 2-1 in favour of the visitors Brighton. Nine minutes after the break, Firmino made things even for Liverpool.

ALSO READ:  "I hate to be put into a mould," says Bhumi on receiving praises for 'Govinda Naam Mera' trailer

But it was half-time substitute Luis Diaz that proved to be the spark Liverpool desperately needed, as he teed up Firmino for his second of the afternoon 10 minutes after the interval, before Webster’s own goal looked to have secured a crucial victory and arrest some of Klopp’s sides’ early season woes.
An own goal by Adam Webster in the 63rd minute gave a lucky Liverpool the lead finally and it seemed that Klopp’s side’s early season woes would end with this game. But Trossard scored another goal, completing a hat-trick seven minutes before full time to deny Liverpool a win, leaving Anfield with a daring display of football.
Following the match, Sky Sports quoted Klopp as saying, “Not a score we wanted, but fair. Being 2-0 down, there are different stories to tell. Coming back and being 3-2 up is a nice story, with a difficult start, obviously. Throwing it away and it being 3-3 is not a nice story. For sure that is what Brighton deserved. We had moments, but we did not play a particularly good game.”
“The start of the game was the worst possible start. You cannot change that, you have to react to it. Brighton are a confident team, a team who is trying to gain confidence. We find a way back in the game. All good. It was intense. We had to make changes for different reasons. Players have played a lot. Yes, I think it is a fair result.”
“Brighton set up in a really brave way. We could not prepare for it because we had no idea what they would do. That is very often football. You have solutions for situations, but before we had any solutions we were 1-0 down. That changed the momentum extremely. They felt like they are flying. We felt like ‘okay, here’s this rubbish start again’. We fought back, that’s positive, although it does not feel it in the moment. We have to accept a point,” he concluded.
Brigthon manager Roberto De Zerbi said, “Trossard is a star. Before when he was in the national team, I sent him a message that he needed to score more goals. I believe he can do even better than today. I say this not because I am unhappy with his game today, but I consider him a great, great, player.”
Liverpool will take on Arsenal next on October 9. Brighton will take on Tottenham Hotspurs on October 8. (ANI)