“I’m focused on investing in America…” US President Joe Biden 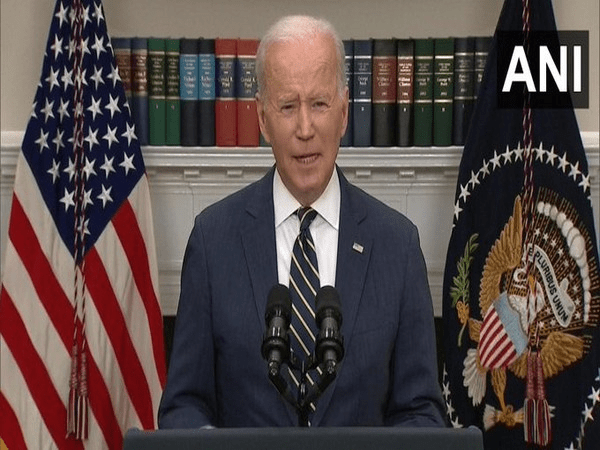 Washington [US], November 9 (ANI): US President Joe Biden on Tuesday attacked the Republican Party for not focusing on foundational programs like Medicare and Social Security, while he is focused on “investing” in America.
“I’m focused on investing in America. Congressional Republicans are focused on placing foundational programs like Medicare and Social Security on the chopping block,” he tweeted.
https://twitter.com/POTUS/status/1590054044009402369?s=20&amp;t=IYJwQMW4UqGulnODMAH5_w
He further attacked the Republicans regarding the Inflation Reduction Act, whose repeal he claims will cause the daily costs to go up.
“Republicans in Congress’ number one priority is repealing the Inflation Reduction Act. It’s the wrong thing to do in this moment. It’d cause everyday costs to go up – not down,” he tweeted.
Earlier he claimed that the US has cut the deficit by $1.4 trillion this year, and will be cutting $250 billion further over the next decade.

“I inherited skyrocketing deficits partially caused by an unpaid-for $2 trillion tax cut that benefitted the very wealthy. This year alone, we’ve cut the deficit by $1.4 trillion. And we’ll cut another $250 billion over the next decade,” he tweeted.
Earlier on Tuesday, the US midterm elections got underway as millions of Americans headed toward their polling booths in Virginia, Maryland and Washington D.C, The Washington Post reported.
According to CNN, there is a total of 435 seats, where lawmakers serve two-year terms. Currently, the situation is a little shaky for Democrats as Republicans are only 5 seats away to gain the majority to control the chamber.
So, while Democrats will be trying to maintain the balance in the mid-term election, Republicans would try to strive harder to increase their current control of governorships and state legislative chambers.
Apart from those 435 seats, there are 35 seats in the 100-seat senate on which the representative will fight against each other. The chamber where incumbents serve for six years is split 50-50, and Democrats currently have control since Vice President Kamala Harris wields a tie-breaking vote. But Republicans only require a net gain of a single seat to take control, reported CNN.
Earlier, US President Joe Biden predicted that Democrats will “surprise the living devil out of a lot of people” in today’s midterm elections, Fox News reported.
This comes as former US President Trump is expected to announce a third White House campaign soon after the midterm elections, reported New York Times citing people familiar with the matter. (ANI)