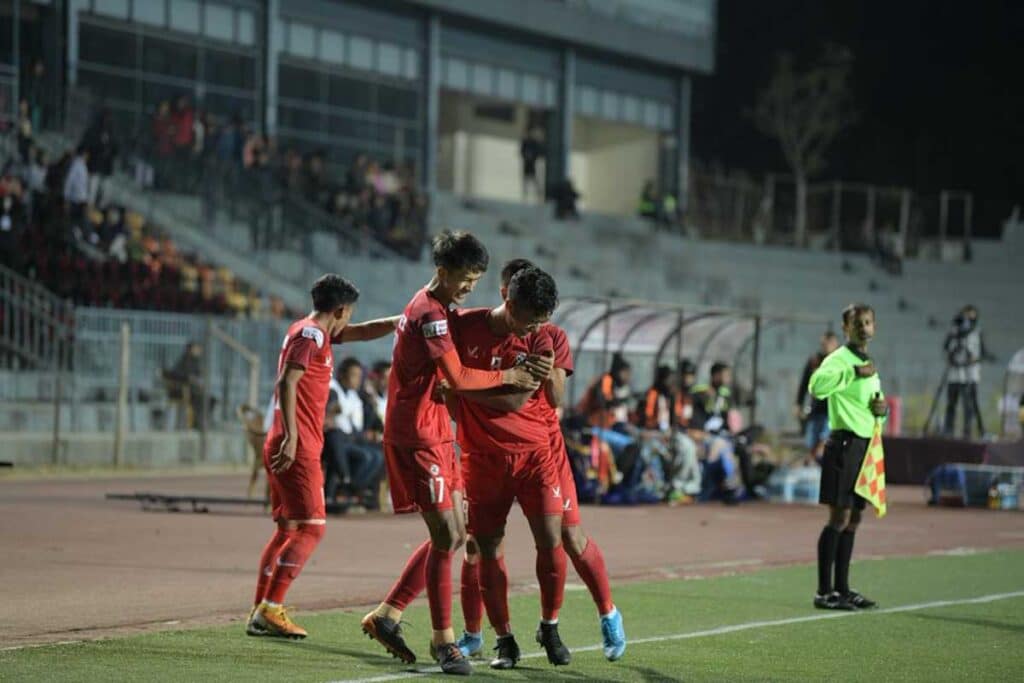 Aizawl FC played out a thrilling 3-3 draw with Punjab FC at the Rajiv Gandhi Stadium in Aizawl on December 20.

In the sixth minute of stoppage time, Punjab appealed for a penalty and this time, it was awarded. Barboza stepped up and with great composure, made it 3-3 to bring an enthralling Hero I-League game, to an end.

The draw takes Punjab FC to second place on the Hero I-League table, while Aizawl FC remain at sixth. Jo Jo was awarded the Hero of the Match.

Jonathan Lalrawngbawla scored one, and set another up for Rochharzela, while the latter scored the third Aizawl goal via a penalty. Meanwhile, Makan Winkle Chothe scored the first for Punjab FC, as Sergio Barboza scored the remaining two for Punjab.

Aizawl FC head coach Stanley Rozario had a new reinforcement in the form of latest signing Joseph Adjei, who was one of the two changes in the starting lineup. The other change was in the form of Jonathan Lalrawngbawla, who started up front in what seemed like a traditional 4-4-2.

The Punjab FC line-up featured a catalogue of changes from their previous match against Indian Arrows. Head coach Yan Law reinstated Anwar Ali to his XI. Bali Gagandeep was also given the nod, as was young Manipuri winger Makan Winkle Chothe, to spearhead a 4-3-3.

The match kicked off in pulsating fashion and it took only four minutes for the first goal to arrive. Joe Zoeherliana played a calculated pass into the 18-yard box, and Jonathan Lalrawngbawla, better known as Jo Jo, did well to reach it and with his outstretched leg and got just enough to see the ball over the line as Aizawl took the lead.

It took Punjab only a minute to reply, as the visitors went level in the fifth minute through a brilliant piece of improvisation by Chothe on the right flank. Through sheer persistence, he made his way into the box, and following a cutback to his left, fired in an unstoppable shot for the equaliser.

In the 15th minute, Sergio Barboza Jr. displayed some samba flair at its finest, as he curled in a delicate, yet beautiful shot into the top right corner from just outside the box to give Punjab the lead.

Aizawl equalised just three minutes later, when Rochharzela soared high and with a towering header to meet Lalrawngbawla’s cross from the right, put the hosts level at 2-2.

In the 40th minute, Aizawl earned a penalty for a handball by Thoiba Singh. Rochharzela stepped up and with fine aplomb and scored his second to restore Aizawl’s lead going into the breather.

In the second half, Punjab came out with serious intent but Aizawl did well to knit threats of their own.

Cavin Lobo, who was also introduced into the fray, almost equalised for a Punjab with a good left-footed drive inside the box, but was denied by an outstanding save by Aizawl keeper Lalremruata.

Rocharzzela almost doubled the lead for Aizawl, when he headed in a beautiful cross from Isak Vanlalruatfela towards goal, only to be denied by yet another spectacular save.