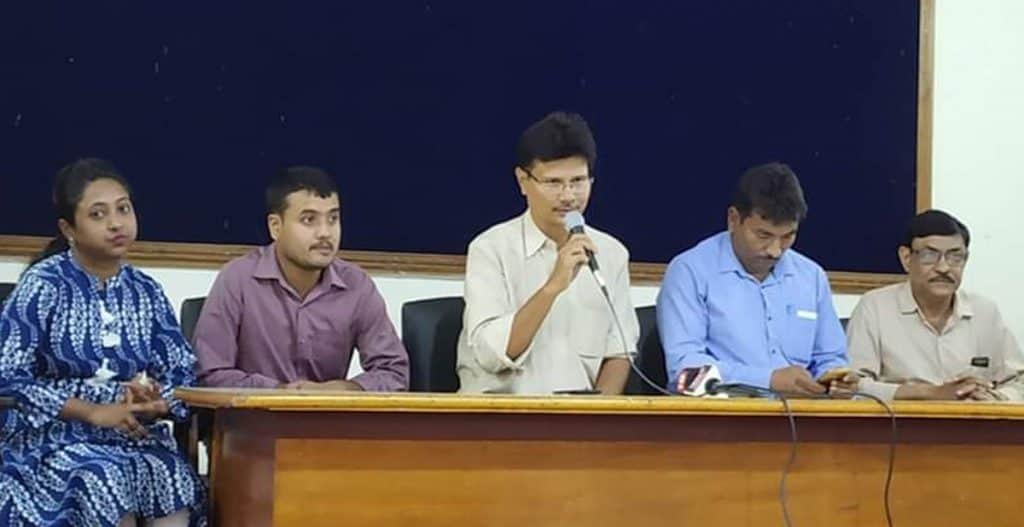 The civil societies and ‘victims’ claimed that a number of objections were made to the NRC process just to hamper and harass the applicants whose ARNs are leaked. They claimed that a big conspiracy is going on as many applicants are harassed in the name of NRC verification by people who did not even bother to attend the hearings after filing their complaints.

Social activists including Har Kumar Goswami, Ashraful Hussain, Syeda Mehzabin Rahman and Zamsher Ali, addressed a press conference at Guwahati Press Club recently and said that the bigger conspiracy is to harass people of a certain community in the name of NRC verification.

Syeda Mehzabin Rahman, a scholar who was also among the victims, criticized the NRC authorities and alleged that they are giving the victims mental trauma and harassment continuously.

She said, “My name was included in the final draft but NRC objections were filed by one Neel Kamal Das. My family do not know him, neither was he present at the hearing at Kalgachia in Barpeta district. How my ARN was made available to the objector? Only NRC authorities and administration had my ARN. Why was the objector absent during the hearing? I directly blame the NRC authorities for making my ARN public. The NRC verification process should be transparent and should be approached in a systematic way.”

The activists and victims also informed that they are going to file FIR once the final NRC is out against those fake objectors who are harassing and were absent in the hearing.

Ashraful Hussain, a student leader from Barpeta, said, “An objection has been filed against my five-year-old nephew. It shows the entire scenario of NRC verification process.”

Senior journalist Zamsher Ali echoed the same that an objection had also been filed against his seven-year-old daughter. “After making these objections, the people do not even bother to attend the hearing while the applicant has to go through the mental trauma of proving their documents,” Ali said.

The activists urged the state government and NRC authorities to take a humanitarian approach to save the victims from the mental trauma and harassment.

Har Kumar Goswami, a social activist against whom NRC objection was filed, said in the name of NRC, the state is creating havoc among the citizens. Goswami said, “I am involved in the citizenship rights in the grassroots level. That is why I am targeted. Not only Bengali speaking Muslims and Hindus are suffering, even Rajbongshi people are being targeted as they have the Bengali surnames.”

The deadline to finalise the National Register of Citizens in Assam is July 31.