Bhuvneshwar Kumar out for next 2-3 games, confirms captain Kohli 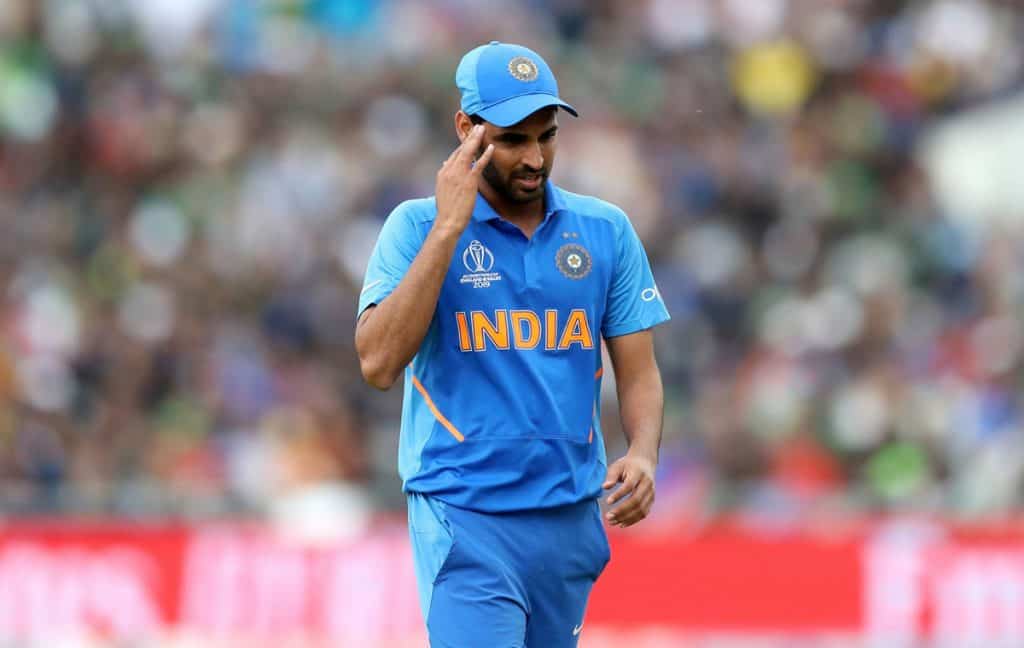 Indian pacer Bhuvneshwar Kumar, who suffered a hamstring injury against Pakistan, will be sidelined for a maximum of three games in the ongoing World Cup, skipper Virat Kohli has confirmed.

Kumar injured his hamstring while bowling the fourth ball of his second over and had to walk off the field during Pakistan’s chase of 337 on Sunday. Upon leaving the field, he was examined by team physio Patrick Farhart and a decision was taken to keep him off the field, with Vijay Shankar and Hardik Pandya combining to fill for him.

“Bhuvi’s case looks like a niggle, a case of slipping on the footmarks. It doesn’t look too serious at the moment and looks like he could recover in a couple of games from now, maximum of three games,” Kohli said at the post-match presentation ceremony after India thrashed Pakistan by 89 runs (DLS method) at the Old Trafford.

The Indian skipper added that they will include Mohammad Shami who is raring to go.

“He is going to be an important factor for us so hopefully he can recover in time. But we have Shami with us and it shouldn’t be much of a worry for us. Even Bhuvi doesn’t think his niggle is too bad and that time would heal it,” he added.

The injury to Bhuvneshwar comes after India lost opener Shikhar Dhawan to a hairline fracture because of which he has also been sidelined for a few games.

Meanwhile, Kohli praised Rohit Sharma, who scored a brilliant 140 and helped India post 336/5 in their full quota of 50 overs. “Rohit’s knock was outstanding today. He again showed today why he is such a good ODI player.”

He was also full of praise for left-arm chinaman Kuldeep Yadav, who picked up two wickets of set Pakistani batters Babar Azam (48) and Fakhar Zaman (62) and confirmed India’s seventh victory over Pakistan in World Cups.

“Kuldeep Yadav was brilliant. Those guys were only trying to play him out. A longer spell helped in that situation and he was getting into rhythm. They were thinking that he would go out of the attack sooner rather than later,” said Kohli.

“That ball to dismiss Babar was just outstanding with the drift, the turn and just beating the batsman batting so well. This is the best he has been bowling since coming to England and, him confident with Chahal, is going to be an important factor for us in the tournament,” he added.

Asked why India-Pakistan games have not lived up to hype in the recent times, the Indian skipper said, “I think they outplayed us in the Champions Trophy 2017 final. But if you focus on this game as too emotional, things can go wrong. We never approach them (the India-Pakistan game) from that perspective. We are professional about it and the result is what that matters.”

India, standing pretty at the third spot with seven points from four games, will next face Afghanistan on June 22 in Southampton.