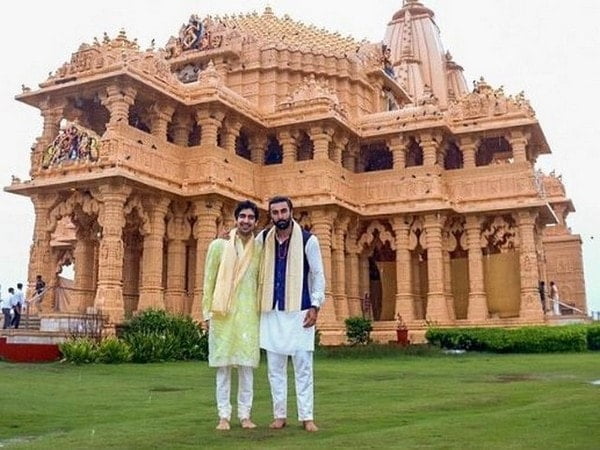 In the picture, he was seen posing with the ‘Shamshera’ actor dressed in ethnic attire.
Ranbir was seen wearing a white kurta-pyjama that he paired with a navy-blue Nehru jacket. On the other hand, Ayan opted for a yellow-white kurta set.
Sharing the picture, he wrote, “Somnath Temple. Shri Someshwaray Jyotirlidaay Maharudray Namah // My Third Jyotirling Visit this year. Had told myself I would come here after Brahmastra releases, and am so happy and energised that we made it here! #gratitude.”
‘Brahmastra’ team including Alia Bhatt, the trio recently headed to Ahmedabad for the film promotion.
Recently, Ayan announced that ‘Brahmastra’ unreleased songs would be out on Dussehra.

He shared the video with a glimpse of songs including ‘Kesariya,’ ‘Deva Deva’ and ‘Dance Ka Bhoot.’
Along with the caption, “Some News on The Music Album Of Brahmastra. There is a lot of Music in the movie which we haven’t released, yet. Like… Rasiya… our Shiva Theme… other versions of our Main Songs… other Themes…The main reason is that we needed to focus on finishing the movie properly pre-release, and couldn’t do justice to launching these tracks properly.”
He added, “This is just a general shout-out to say that we are resuming this Journey with focus and excitement now… that we plan to launch Rasiya and other tracks starting early next week…And we plan to have our entire Brahmastra Music Album complete and released – by DUSSEHRA, Oct. 5th ! #musicofbrahmastra.”
‘Brahmastra’ is helmed by Ayan, along with Ranbir and Alia. The film also stars Amitabh Bachchan, Mouni Roy and south actor Nagarjuna in the lead roles. (ANI)