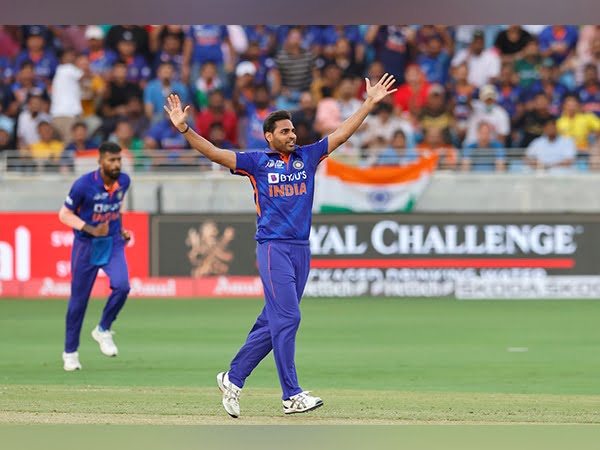 New Delhi [India], September 21 (ANI): With debates being sparked on whether Bhuvneshwar Kumar is adept enough to bowl the death overs for India, Australian cricketer Matthew Hayden backed the Indian pacer and said he has been a very good “finisher.”
India’s road to the ICC Men’s T20 World Cup started off on a rather sour note as Australia comfortably cruised to victory even as India put on a massive score to fend off the World Champions.
Speaking on Star Sports show – ‘Match Point’, former Australian cricketer Matthew Hayden spoke about who his star performer for Australia in the first T20I against India was and whether India can stick on to their current death bowling regime ahead of the second and third T20Is later this week.

Hayden backed the pacer and said, “I disagree with that, I think he can and has been a very good finisher. I think that’s his role, I mean, obviously, his role is to take wickets up front but if your skipper wants an over or two from you at the end, then he can do that.”
With the challenge of ‘Mission Melbourne’ looking even more daunting than before, major issues in India’s bowling need to be addressed as the death overs have become a major talk point in India’s recent performances.
With many of Australia’s young guns and debutants stealing the show last night in Mohali, there seems to be a long way to go before India can be confident about having a successful World Cup campaign.
With India receiving another ‘reality check’ before the start of the ICC Men’s T20 World Cup, the stakes are high as they face Australia to save the series in the second T20I on September 23, 2022.
Speaking on Cameron Greene’s performance against India, Hayden said, “Greene, he has been a really big asset for Australian Cricket for a couple of years now. He’s a genuine all-rounder. I just think he’s such a huge part of the future of Australian cricket. So it doesn’t really surprise me, he’s very capable, he’s a big man with good skills. He looked a little bit disappointing with the ball, but it’s a tough place to bowl.” (ANI)

ALSO READ:  Akhilesh Yadav will not become CM, nor make anyone else: UP Deputy CM Maurya