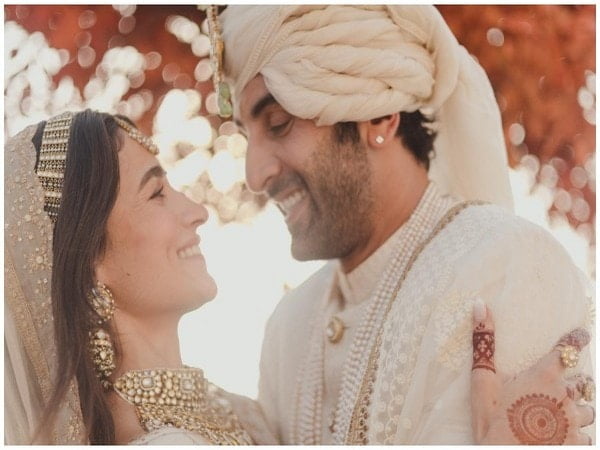 Mumbai (Maharashtra) [India], September 28 (ANI): Ranbir Kapoor turned 40 on Wednesday, and while many from the industry wished him on social media, the most special wish came from his wife Alia Bhatt.
Alia shared an unseen photo of Ranbir and wrote, “happy 40 baby”.
The photo is from Ranbir’s birthday celebration last night in which he is seen standing in front of a banner that reads “cheers to forty years”.

On the occasion, Ranbir’s sister Riddhima Kapoor Sahni also shared pictures with a sweet birthday wish for him on social media. Taking to her Instagram stories, Riddhima dropped pictures featuring Ranbir and other family members.
The first picture is from Alia-Ranbir’s wedding functions where the Barfi actor was seen holding a photo frame of his father Rishi Kapoor. Ranbir was seen wearing a red kurta pyjama.
Sharing the picture, she wrote, “Happy happiest birthday baby bro”, with pink heart emojis.

“We love you so much,” she captioned the photo.

Ranbir turned 40 today.
In a career spanning over 15 years, Ranbir, the grandson of the Indian film industry’s ‘Greatest Showman’ Raj Kapoor and son of late Rishi Kapoor, has carved his niche as an actor with his diverse character choices.
He made his Bollywood debut with Sanjay Leela Bhansali’s ‘Saawariya’ in 2007 and since then he has given his fans an expansive range of performances.
From lover boy to a man ruined in love, from a dream chaser to one suffocated under the burdens of society, Ranbir has played all his characters with excellence.
The film credits include- ‘Wake Up Sid’, ‘Rocket Singh: Salesman Of The Year’, Barfi’, ‘Ajab Prem Ki Ghazab Kahani’, ‘Raajneeti’ Barfi, ‘Rockstar’, ‘Sanju’ and many more.
Meanwhile, on the work front, Ranbir was recently seen in a sci-fi action film ‘Brahmastra: Part-1 Shiva’ alongside Alia Bhatt, Mouni Roy, Amitabh Bachchan and south actor Nagarjuna. The film was released on September 9, 2022, and has collected over Rs 300 crores globally at the box office.
The actor will be next seen in an untitled film directed by Luv Ranjan in which he will share screen space with Shraddha Kapoor for the first time. The film is all set to hit the theatres on March 8, 2023.
And he will also be seen in director Sandeep Reddy Vanga’s next ‘Animal’ opposite Rashmika Mandanna. (ANI)