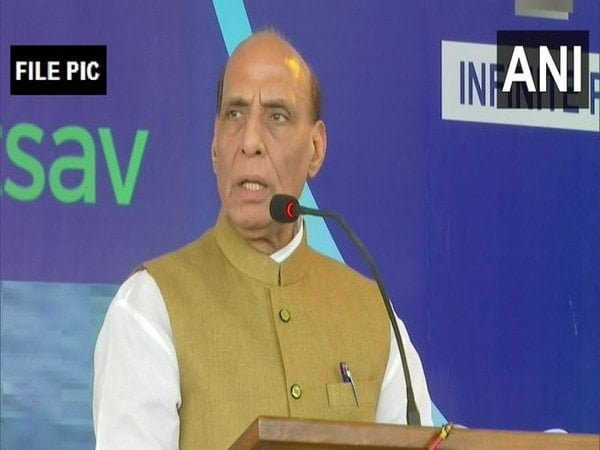 New Delhi [India], September 17 (ANI): Defence Minister Rajnath Singh will pay a three-day visit to Egypt starting Sunday to further extend defence cooperation between the two countries.
Taking to Twitter, Rajnath said that he is looking forward to holding discussions with his counterpart General Mohamed Ahmed Zaki.
“Tomorrow, 18th September, I would be in Cairo, on a three-day visit to Egypt. Looking forward to holding discussions with my counterpart, General Mohamed Ahmed Zaki to further strengthen defence cooperation between both the countries,” Rajnath tweeted.

According to an official statement, during the visit, the two counterparts will review the bilateral defence ties, explore new initiatives to intensify military-to-military engagements and focus on deepening cooperation between the defence industries of the two countries.
An MoU to provide further impetus to enhanced defence cooperation between India and Egypt will also be signed, as per Defence Ministry statement.

“The Raksha Mantri will also call on President of Egypt Mr Abdel Fattah Al-Sisi. The visit by Shri Rajnath Singh aims to further consolidate defence cooperation and the special friendship between India and Egypt,” it added.
Egypt is one of the largest investment destinations for India in the region with an existing Indian investment of USD 3.15 billion. Indian companies continue to execute several projects in Egypt.
Moreover, to bolster defence cooperation between the two countries, a team of the Indian Air Force arrived in Egypt on June 22 to participate in a bilateral ‘Tactical Leadership Programme’ with the Egyptian Air Force.
Earlier in November, last year, Chief of Air Staff Chief Marshal VR Chaudhari went to Egypt for his five-day visit to attend the Air Power Symposium and Defence Exposition (EDEX) in Cairo.
This event was scheduled from November 28 to December 2.
The year 2022 is of particular significance since it marks the 75th anniversary of diplomatic relations between India and Egypt.
Egypt and India also enjoy cordial defence relations. There was close cooperation between the Air Forces, with efforts at jointly developing a fighter aircraft in the 1960s. IAF pilots had also trained Egyptian pilots from the 1960s until 1984. In the recent past, since 2015, there have been several high-level exchanges of visits by defence delegations. (ANI)