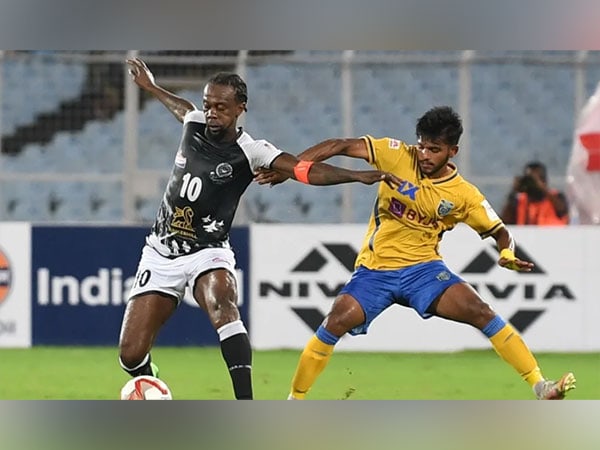 Kolkata (West Bengal) [India], September 10 (ANI): Kerala Blasters FC bowed out of the Durand Cup after a 0-3 defeat against Mohammedan SC in the first quarter-final at the Salt Lake stadium on Friday.
SK Faiaz (17′) and Abiola Dauda (59′, 84′) brace settled the contest in the home side’s favour as the young Kerala Blasters FC side came up short.
Mohammedan SC started the game well and had a chance to go ahead in the 4th minute when Marcus Joseph headed a Faiaz corner just wide of the target.
However, the two reversed roles in the 17th minute as Joseph turned provider for Faiaz as he tapped in from close range to give Mohammedan the lead.
Kerala Blasters FC improved as the half wore on and had a good chance to equalise just before half-time when Mohammed Aimen received the ball and turned quickly but his shot was straight at the goalkeeper.

Mohammedan SC went into the break with their noses in front. Kerala Blasters FC goalkeeper Sachin Suresh was called into action early in the second half as he saved Azahar’s effort after a good combination move from Mohammedan.
Sachin was helpless in the 59th minute as he couldn’t prevent Dauda’s shot from going in and making it 2-0 in Mohammedan’s favour.
Kerala Blasters FC threatened to reduce the deficit with Aimen involved again but his effort in the 74th minute was saved by the goalkeeper.
The result was then put beyond all doubt when Dauda scored his second goal of the match as dispatched a perfect cross from Abhishek Ambekar in the 84th minute to make it 3-0.
There was no fightback from the Kerala Blasters FC in the dying minutes as the young side who enjoyed a fine campaign exited the tournament after another strong showing. (ANI)