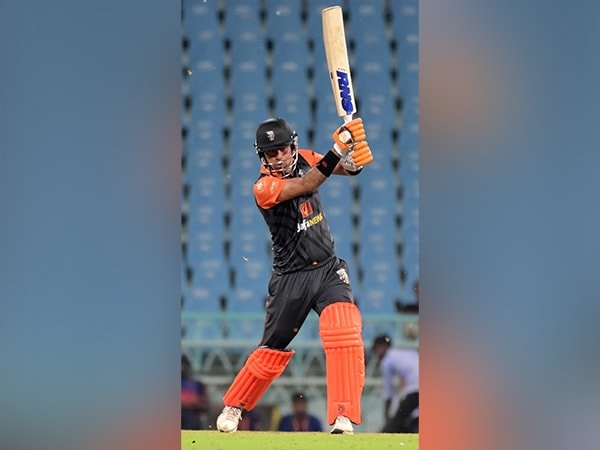 Lucknow (Uttar Pradesh)[India], September 19 (ANI): The evergreen Mohammad Kaif and fiery Fidel Edwards showed they still possess skills that can enthrall crowds when the Manipal Tigers and Bhilwara Kings clashed on Sunday in the second game of the Legends League Cricket 2022, which is being held in India for the first time.
It was Kaif’s well-made half-century that helped the Tigers post 153/7 in 20 overs after the early jitters they received from Edwards.
As Irfan’s men threatened to run through the Tigers’ line-up, Kaif, whose heroics in the 2002 Natwest Trophy final against England is still talked about, stood up in resistance. The right-handed batter showed composure in the face of pressure to author an innings of 73 off 59 balls to pull the wounded Tigers up.
Kaif hit 10 boundaries before Edwards returned to dismiss him. The former West Indies pacer finished with figures of 4/30 from his four overs.
All the action happened after Bhilwara captain Irfan Pathan won the toss and asked the Tigers to bat first at the Ekana Cricket Stadium. Irfan’s decision was vindicated when the Tigers got reduced to 15/4 by the fourth over.

Running the show was Caribbean speedster Edwards. After captain Irafn gave his team the first breakthrough, scalping Ravikant Shukla with the last ball of the very first over of the game, Edwards took over, terrorising the Tigers with his pace and swing.

He first trapped Corey Anderson leg before wicket when the New Zealander was caught plumb in front of the wickets, offering no shot to an incoming delivery. Edwards, who is known for his “you can’t see me” celebration after taking a wicket, followed that up with the dismissals of Swapnil Asnodkar and Ricardo Powell. Both the batters were caught behind by Bhilwara ‘keeper Naman Ojha.
The League’s trend to throw up unlikely heroes also continued as Pradeep Sahu made 30 off 19 balls to support Kaif and the Tigers. The 37-year-old Sahu is a former Haryana player, who is also a capable leg-break bowler.
S. Sreesanth, who was Bhilwara’s supersub, also claimed a wicket. (ANI)