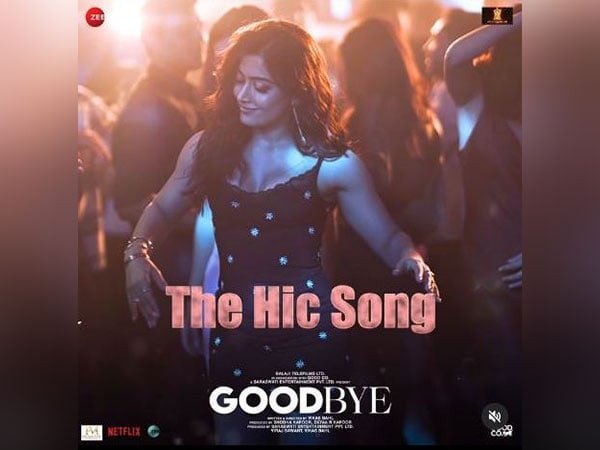 Mumbai (Maharashtra) [India], September 16 (ANI): South sensation Rashmika Mandanna’s second track ‘The Hic Song’ from her upcoming film ‘Goodbye’ is out!
On Friday, Rashmika took to her Instagram handle and shared the song, she captioned the post, which read, “I haven’t stopped grooving to it ever since I heard it for the very first time. I hope you all love it as much as I do #TheHicSong #GoodbyeOnOct7”
‘The Hic Song’ marks Rashmika’s first Bollywood party anthem song. The song is written by Vikas, composed by Amit Trivedi and sung by Sharvi Yadav.

In the song, the ‘Pushpa’ star could be seen dancing her heart out in the party anthem, donning a black one-piece outfit with a plunging neck.

Directed by Vikas Bahl, ‘GoodBye’ also stars Amitabh Bachchan, Neena Gupta, Pavail Gulati, Elli AvrRam, Sunil Grover, and Sahil Mehta in prominent roles.
The story of ‘GoodBye’ revolves around self-discovery, the importance of family and the celebration of life in every circumstance beautifully depicted by the Bhalla family.
The film portrays the mayhem of every family dealing with the ups and downs that life throws but it also gently reminds the significance of being there for each other, through it all.
Produced by Ekta Kapoor, the film is set to hit the theatres on October 7, 2022.
Meanwhile, Rashmika will be seen in ‘Mission Majnu’ alongside Sidharth Malhotra and in director Sandeep Reddy Vanga’s next ‘Animal’ opposite Ranbir Kapoor.
Amitabh, on the other hand, will be next seen in director Sooraj Barjatya’s next family entertainer film ‘Uunchai’ along with Anupam Kher, Parineeti Chopra and Boman Irani, which is all set to hit the theatres on November 11, 2022. (ANI)

“He’s the best teacher”, Rashmika Mandanna on her work experience with Amitabh Bachchan