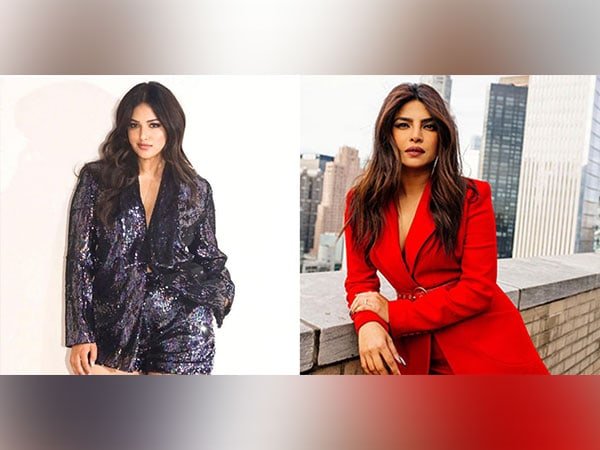 New Delhi [India], September 25 (ANI): Miss Universe 2021 Harnaaz Kaur Sandhu, on Sunday shared a picture featuring former Miss World Priyanka Chopra Jonas on social media.
Taking to her Instagram handle, Harnaaz dropped a picture from the meet-up with Priyanka.
https://www.instagram.com/p/Ci6jSnDDoj_/
Harnaaz meets the ‘Bajirao Mastani’ actor at the Global Citizen Festival.
In the picture, Harnaaz could be seen standing next to the 40-year-old actor, who was dressed in a white crop top that she paired with an abstract printed shrug and trousers.
On the other hand Miss Universe was seen wearing a black tee that she teamed up printed blazer and blue flared pants.
They were also accompanied by two girls in the picture.
Sharing the picture, Harnaaz wrote, “I couldn’t have asked for us to meet in any other way. Thanks @priyankachopra for your kindness at @glblctzn … you killed it!”
As soon as the picture was posted, the fans and industry friends chimed into the comment section.
Former Miss World reacted with a heart and smile with red heart emojis.

One of the users wrote, “ICONIC.”

Harnaaz is the first Indian woman to secure the Miss Universe win in 21 years after Lara Dutta won the pageant in 2000.
22-year-old defeated contestants from 79 countries to bring home the title. The 70th Miss Universe 21 was held in Eilat, Israel.
Harnaaz, who belongs to Chandigarh, Punjab, has previously bagged numerous pageant titles including LIVA Miss Diva Universe 2021 and Femina Miss India Punjab 2019.
Priyanka is the UNICEF global goodwill ambassador. She has been working with the organisation for more than a decade now. Recently, she addressed the United Nations General Assembly and spoke in depth about the problems the world is currently facing.
Meanwhile, on the work front, Priyanka will be seen in international projects such as ‘It’s All Coming Back To Me’, and the series ‘Citadel’. Produced by Russo Brothers, ‘Citadel’ will hit the OTT on Prime Video. The upcoming sci-fi drama series is being directed by Patrick Morgan and stars Richard Madden alongside Priyanka.
In Bollywood, she will be starring with Alia Bhatt and Katrina Kaif in Farhan Akhtar’s ‘Jee Le Zaraa’, which promises to be another tale of friendship following the lineage of ‘Dil Chahta Hai’ and ‘Zindagi Na Milegi Dobara’, both of which have become cult classics over the years. ‘Jee Le Zaraa’ is reportedly going on floors around September 2022 and will be ready for release in the summer of 2023. (ANI)

ALSO READ:  FIFA WC: Advantage USA as they lead Iran 1-0 at first half