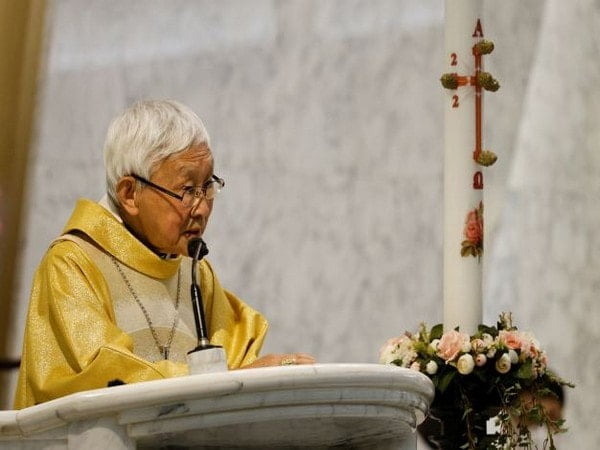 Hong Kong, September 26 (ANI): Known as the “conscience of Hong Kong” among his supporters, Cardinal Joseph Zen, a 90-year-old former bishop of Hong Kong has gone on trial on Monday under the national security law.
Zen, one of Asia’s most senior Catholic clerics, was arrested by Hong Kong’s national security police in May along with three other leading democracy activists, including Cantopop star Denis Ho, reported CNN.
The four trustees of the protest fund were initially arrested on suspicion of “collusion with foreign forces,” a charge under a sweeping national security law that carries a maximum punishment of life imprisonment.
CNN reports that he is also charged over his role in a relief fund for the city’s pro-democracy protests in 2019.
He along with Cantopop star Denis Ho has been charged with a lesser offence for failing to register the 612 Humanitarian Relief Fund, set up in June 2019 to help pay the legal and medical fees for protesters under arrest. The fund ceased operations last year following an investigation by the national security police.
The charge under the Societies Ordinance, a century-old colonial-era law, carries a fine of up to HKD 10,000 (USD1,274) but not jail time. All have pleaded not guilty.
Zen’s trial comes at a sensitive time for the Vatican, which is preparing to renew a controversial deal with Beijing over the appointment of bishops in China, reported CNN.

Under the original deal struck in 2018, the Vatican recognized the legitimacy of seven bishops appointed by the Chinese government.
The deal came at a time when China was doubling its crackdown on underground Christian groups as part of leader Xi Jinping’s campaign to bring religion under the absolute control of the Communist Party.
Zen has openly criticized the deal, calling it an “incredible betrayal” and accusing the Vatican of “giving the flock into the mouths of the wolves.”
In 2020, the Vatican said the deal was extended for another two years.
Zen has long advocated for democracy, human rights and religious freedom. He has joined some of the city’s most important protests, from the mass rally against national security legislation in 2003 to the “Umbrella Movement” demanding universal suffrage in 2014.
Zen’s prosecution is the latest in an ongoing crackdown on Hong Kong’s pro-democracy movement, which saw the Asian financial hub rocked by street protests throughout much of 2019 in resistance to Beijing’s tightening grip.
Beijing responded by imposing a controversial national security law in 2020, which critics say has been used to crush the city’s opposition movement, overhaul its electoral system, silence its outspoken media and cripple its once-vibrant civil society.
Most of Hong Kong’s prominent pro-democracy figures have either been thrown in jail or gone into exile, reported CNN.
The Hong Kong government has repeatedly denied the national security law is suppressing freedoms. Instead, it insists the law has ended chaos and restored stability to the city. (ANI)