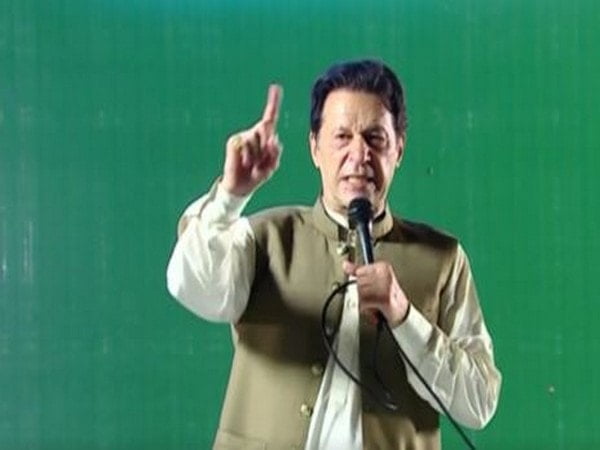 Islamabad [Pakistan], September 23 (ANI): Pakistan Tehreek-i-Insaf (PTI) chief Imran Khan has issued a warning to Shehbaz Sharif’s government that he will enter Islamabad for his latest power show with “full preparations” and that the incumbent government will not find a place to hide if they resort to violence against peaceful marchers.
Imran Khan issued these remarks on Thursday in response to comments made by Pakistan Interior Minister Rana Sanaullah where he warned PTI followers against marching towards D-Chowk in the national capital, the Dawn newspaper reported.
“We were not fully ready on May 25 when Rana Sanaullah used massive teargas shelling against PTI women and children because we intended to hold a peaceful long march on the federal capital,” Khan said while referring to the PTI march held in May.

The former Pakistan Prime Minister also promised to once again give the final call for a nationwide protest after fully preparing his party workers for a decisive battle to liberate Pakistan from the “corrupt” rulers once and for all.
He claimed that his government had allowed Pakistan Democratic Movement (PDM) chief Fazul Rehman to hold their rallies without placing any obstacles in their way or filing cases against them and complained that the “corrupt junta” used teargas and shelling against peaceful PTI marchers.
“We have a protest on Saturday, I will hold a rally in Rahim Yar Khan and there will be historic protests across the country,” he was quoted as saying by Dawn. The protest would be a litmus test for them after which he would decide when to give the final call, he added.
Continuing with his foreign conspiracy tirade, Khan further said no country sacrificed its people to fulfil the wishes of others, but the rulers of Pakistan allowed the West to carry out around 400 drone attacks in the country and imposed a foreign war here.
“I want to see Pakistan never kneeling before any other country and not sacrificing its people in someone else’s war,” he added. (ANI)