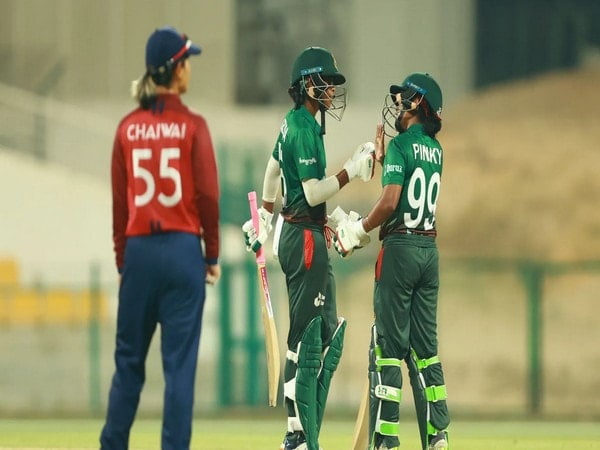 Abu Dhabi [UAE], September 24 (ANI): Ireland and Bangladesh have booked their places in the ICC Women’s T20 World Cup in South Africa in 2023 with victories over Zimbabwe and Thailand respectively in the semi-finals of the qualifiers in Abu Dhabi.
Put in to bat first in the 1st semi-final of the ICC Women’s T20 World Cup Qualifier 2022, Ireland managed to post 137/6 on board with valuable contributions from the middle-order.
The team’s star opener Gaby Lewis departed in the Powerplay, but Orla Prendergast played an impressive knock last game, carried Ireland with an innings of 28 runs in 25 balls before she was dismissed in the 12th over.
Laura Delany and Eimear Richardson got a good start, but couldn’t quite give the innings a push. That came from Rebecca Stokell, whose 26-run knock in 12 balls gave Ireland a strong push towards the end.
In the run chase, Sharne Mayers held the fort for Zimbabwe with a 36-ball 39. Skipper Mary-Ann Musonda gave her a good helping hand with a 29-ball 31, the pair stringing together a fifty-run stand before Mayers was dismissed.
Arlene Nora Kelly and Jane Maguire took two wickets apiece and Zimbabwe’s required run rate got steeper once the skipper too was sent back. They eventually fell short by four runs as Ireland made it to the finals, ensuring their qualification to the ICC Women’s T20 World Cup in South Africa next year.

Bangladesh beat Thailand to qualify for the ICC Women’s T20 World Cup in South Africa in 2023.
Put to bat first, Bangladesh got off to a decent start, ambling along to 27/0 at the end of the Powerplay. Losing Fargana Hoque immediately after dented Bangladesh further.
Thailand tightened the web around Bangladesh with more wickets in the second half of the innings as batters got starts without quite converting them. Captain Nigar Sultana never got a chance to play an impactful inning, making 17 off 24 balls before falling in the 15th over.
It needed a late cameo from Rumana Ahmed, a 28 runs knock in 24 balls to help Bangladesh post a total of 113/5, which still seemed below par.
Bangladesh made up for the small total with a strong Powerplay with the ball, taking three Thailand wickets and conceding just 13 runs in the first six overs. Natthakan Chantham held the innings together for the Number three position but she struggled to get support from the other end as Bangladesh kept things tight.
Sanjida Akter and Salma Khatun starred with the ball for Bangladesh, taking two wickets apiece, and bowling very economical overs.
For Thailand, Chantham made her fifth half-century, but it wasn’t enough for her team to get close enough as Bangladesh beat them to the T20 World Cup in South Africa next year. (ANI)

Role of Pakistani Army in politics: How neutral is the establishment?