Jaishankar meets his Saudi counterpart on sidelines of UNGA 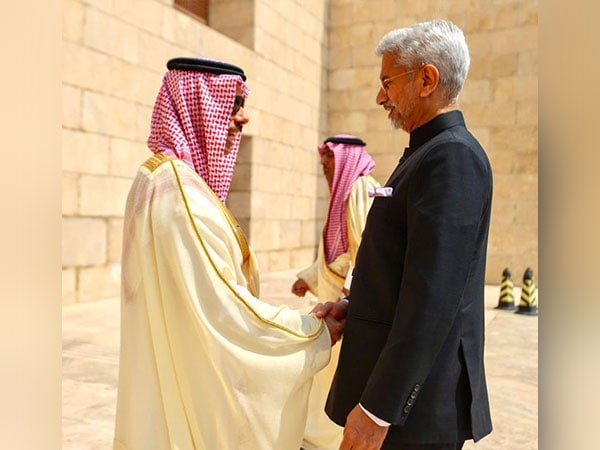 New York [US], September 23 (ANI): External Affairs Minister (EAM) S Jaishankar met his Saudi counterpart Prince Faisal bin Farhan Al Saud on the margins of the UN General Assembly (UNGA) on Friday.
“Warmest greetings to FM @FaisalbinFarhan and the Government and the people of the Kingdom of Saudi Arabia. Confident that the Strategic Partnership Council will guide our ties to higher levels,” Jaishankar tweeted.
India-Saudi Arabia relations have strengthened considerably over the past few years including in political, security, energy, trade, investment, health, food security, cultural and defence fields. The top leadership of both countries remained in close touch even during the Covid pandemic.
This latest meeting came a few weeks after Jaishankar paid an official visit to the Kingdom on September 10-12. This was his first visit to the Kingdom as External Affairs Minister of India.
During the visit, EAM co-chaired the inaugural Ministerial Meeting of the Committee on Political, Security, Social and Cultural Cooperation (PSSC), established under the framework of the India-Saudi Arabia Strategic Partnership Council, with the Foreign Minister of Saudi Arabia, Prince Al Saud.

The two ministers undertook a comprehensive review of the entire bilateral relationship and discussed the progress under the four Joint Working Groups of the PSSC Committee.
Both ministers assessed the progress in bilateral relations positively across all domains including political, trade, energy, investments, defence, security and culture. Several areas were identified for further enhancing bilateral cooperation such as food security, healthcare, pharmaceuticals, defence industry and entertainment.
Both sides also discussed regional and international issues of mutual interest.
During the visit, EAM met other Saudi dignitaries and reviewed the bilateral relations and discuss ways to enhance them. The external affairs minister also interacted with the Indian community in Saudi Arabia.
The EAM and GCC Secretary General also signed an MOU on Mechanism of Consultations between India and GCC. The MOU provides for the institutionalization of annual dialogue between India and the GCC and setting up Working Groups on different areas of cooperation. (ANI)

ALSO READ:  Gujarat free of curfew after 2002...Cong has no rights to talk about peace: Amit Shah