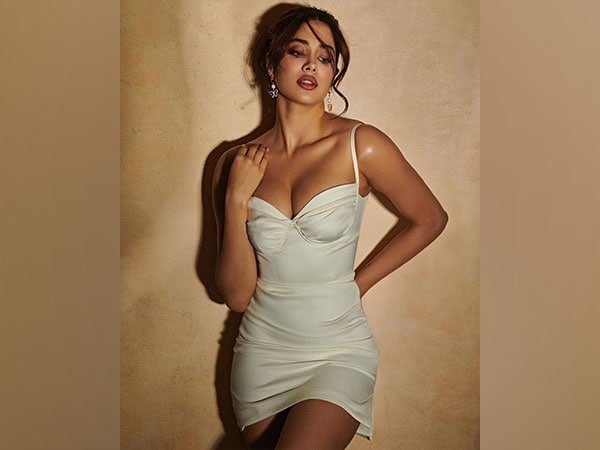 Mumbai (Maharashtra) [India], September 18 (ANI): On Sunday, actor Janhvi Kapoor left fans enthralled with her hot style statement in a white bodycon dress.
Taking to Instagram, Janhvi dropped a string of images in which she is seen flaunting her curves.
She served ultra-glamorous look for fans in the mini dress with a plunging neckline. She kept her hair tied in a bun style. Her makeup is on point. She has applied a subtle one with brown colour lipstick.


“Passionate from miles away, passive with the things u say,” Janhvi captioned the post.

As soon as Janhvi posted the pictures, netizens chimed in the comment section to praise her beauty.
“Hottest,” a social media user commented.
Fashion designer Manish Malhotra and Janhvi’s aunt Maheep Kapoor dropped fire emojis in the comment section.
Janhvi has undoubtedly turned into a fashionista over the years.
Meanwhile, on the work front, Janhvi, who recently enjoyed good reviews for her OTT movie ‘Goodluck Jerry’, is now shooting for her next film ‘Mr and Mrs Mahi’.’Mr and Mrs Mahi’ also stars Rajkummar Rao in a key role. The film is set against the backdrop of cricket. Directed by Sharan Sharma, it is backed by Karan Johar. It is slated to release on October 7 and will clash with Amitabh Bachchan-Rashmmika Mandanna starrer ‘GoodBye’.
Janhvi also has ‘Bawaal’ with Varun Dhawan. (ANI)

It is a definite option for us: India skipper Rohit Sharma on Virat Kohli opening in T20I World Cup